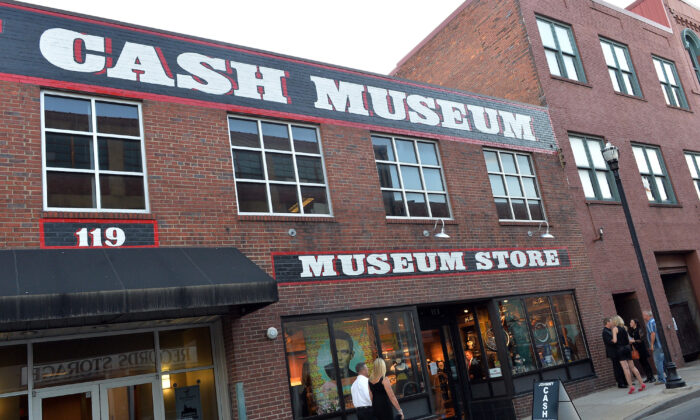 The Johnny Cash Museum in seen in Downtown Nashville, Tenn., on May 29, 2013. (Rick Diamond/Getty Images)
By Tom Ozimek

Nashville Mayor John Cooper has proposed a 31.7 percent increase in property taxes as the city struggles to balance its budget due to pandemic-driven business shutdowns that undercut tax revenue.

“This is an unprecedented and difficult time for all Nashvillians,” said Mayor Cooper. “Thousands of residents have lost their jobs during the pandemic, and that makes the necessary decision to raise taxes all the more difficult,” he added.

The mayor’s office projected that Nashville will suffer a revenue decline of more than $470 million due to the tornado and pandemic.

A tornado ripped through parts of Nashville in early March, causing multiple deaths and destroying a number of homes and businesses.

The outbreak of the CCP (Chinese Communist Party) virus, the novel coronavirus that causes COVID-19, has so far led to 10,366 confirmed infections in Tennessee and 195 deaths, according to state health authorities.

“The city has thinned its cash reserves to a point where we find ourselves without a rainy-day fund during a stormy season. This is a crisis budget – not a discretionary budget – that will ensure Metro and Metro Nashville Public Schools can continue to meet our community’s needs,” Cooper said.

Nashville, I will be presenting my budget proposal for Fiscal Year 2021 to Metro Council and invite you to virtually attend. You can watch on @MNNGov channels, Roku, and https://t.co/GGt1ZJCN0j or live streaming to my Facebook Page starting at 3:30 p.m. pic.twitter.com/NBSHlGpC5N

“This budget will ensure the continuity of essential services so that Metro and MNPS (Metro Nashville Public Schools) can still meet the need for response and recovery,” the Metro Finance Department stated in a presentation (pdf) of the proposed operating budget for fiscal year 2021.

Cooper said one of the objectives of the tax hike is to avoid laying off city employees.

“If any council members don’t want to approve this let us know and we will have to begin mass layoffs,” Cooper said, The Hill reported.

Meanwhile, efforts to start reopening the Tennessee economy saw restaurants in 89 of the state’s 95 counties resume dine-in service this week, subject to guidelines like social distancing by limiting capacity to 50 percent and adjusting store hours for extra cleaning.

“Nashville is stronger than our current challenges,” Cooper said. “This is the operating budget that will get us through this crisis and prepare for a return to prosperity.”