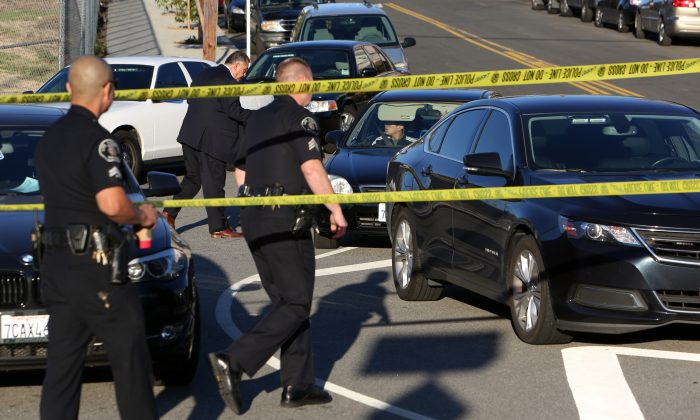 Police officers turn arriving parents and students away from a closed Edward Roybal High School in Los Angeles, on Tuesday morning, Dec. 15, 2015. Less than a week after an emailed threat shut down the L.A. schools, a threat to the Nashua, N.H. district has done the same. (AP Photo/Richard Vogel)
US

All schools in Nashua, New Hampshire are closed on Monday after a threat of violence.

Police are investigating the threat and the district plans to re-open the schools on Tuesday.

“We have received a detailed threat of violence to harm students and staff at both high schools,” said Superintendent Mark Conrad in a statement.

The threat was specific to Dec. 21, he added.

“Because the threat is specific and extends to several schools, we will be cautious and close all of our public schools,” he said.

“I regret any difficulties this creates for working parents but safety must remain our first priority.”

Police are working with school officials to try to determine if the threat is real, and find who is behind it.

Governor Maggie Hassan said in a statement that officials “are closely monitoring the situation in Nashua” and that “State Police and state emergency management officials are working closely with the Nashua Police Department, local public safety officials and the FBI.”

The shut down of the district’s schools, which means approximately 11,500 students are missing classes, comes less than a week after the country’s second-biggest school district received a threat and shut down for a day.

But L.A. officials defended their decision. “I, as superintendent, am not going to take the chance with the life of a student,” said Superintendent Ramon Cortines.

“It’s definitely a tight rope,” Nashua police Lt. Kerry Baxter told reporters, according to CNN. “It’s a tough decision to make. These seem to going on throughout the country. They seem to be happening more frequently, and they are disruptive on many different levels.”