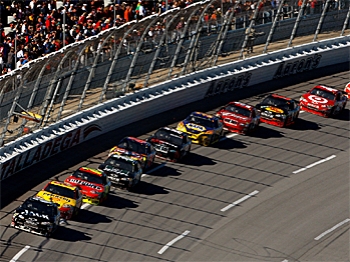 The field spent most of the race single file, afraid to race for fear of being penalized, or being wrecked. (Chris Graythen/Getty Images)
Motorsports

Opinion: Did NASCAR Kill ‘Dega for No Reason?

By James Fish
Print
As the NASCAR Amp Energy 500 at Talladega Superspeedway approached, fans, teams, drivers, and NASCAR officials were on edge, fearing “The Big One,” the high-speed multi-car wreck that would eliminate half the field. Restrictor-plate racing—190 mph pack racing—with aerodynamically unsteady cars in a series where wrecking the competition is considered a legitimate way to win, breeds multi-car wrecks.

“Bump-drafting,” actually pushing the car ahead at 190+ mph, is commonplace in restrictor–plate racing. Used with caution, a pair of cars can create a draft and by gently pushing, can break away from the field. But because the cars lack downforce, bump-drafting is also a great way to spin a car.

Bump-drafting through corners is almost impossible to do safely. If the lead car feels loose and touches the brakes (easing off the gas can’t be done with restrictor plates, as the plate limits throttle response: back off, and the car loses a dozen places instantly) the pushing car will push the leader into a spin, and when anyone spins in a field of 43 cars running two or three wide, door-to-door and nose-to-tail, the only determining factor is luck. Skill, reflexes, experience mean nothing. Either the crash misses a given driver, or that driver crashes along with the rest.

NASCAR, alarmed by the sight of cars bump-drafting through the corners in practice, issued a questionable ruling: NACAR wanted to see daylight between cars coming around the corners, and offending drivers would get a pass-through penalty.

How would NASCAR determine if the cars were too close? How would drivers know how close they could get? NASCAR painted itself into a corner. If NASCAR officials called every car that got too close to another, the race would be decided by penalties, not racing, and every penalized driver would protest, that some other driver was just as close but didn’t get called.

But if NASACR didn’t penalize every violator immediately, drivers would test the limit, and when a penalty was issued, it would seem arbitrary. Again, protests would ensue and the race would be tarnished.

NSSCAR, in an attempt to save the race, killed the race.

For 180 laps, racing was scrupulously avoided by most of the fields, most of the time. Now and then a group would hook up and challenge for the lead, but immediately everyone would drop back into line. Most of the race was run single file, as no driver wanted to be the one NASCAR chose as its example.

Not until the final ten laps did the drivers start seruiously contesting the lead. On lap 180, race officials warned all the drivers not to bump-draft through the corners, as everyone had decided to ignore the rule and actually try to win the race.

Jimmie Johnson and some of the other Chase drivers opted to run thirty places back, in a separate pack, so as to avoid the carnage which everyone felt was inevitable.

Sadly, inevitable it was. On lap 183, only five from the checkered flag, Marcus Ambrose tapped Ryan Newman twice. The second tap sent Newman spinning, and once his car was tail-first, it lifted off the track—at 190 mph— and flipped, slamming down on the hood of Kevin Harvick’s car. Newman bounced off, slid upside down across the track, slammed the outside wall, and rolled repeatedly back across the track to end up upside down in the infield.

The race was red-flagged while everything was cleaned up. When the race went back to yellow, a dozen or so drivers had to pit for fuel. Jeff Gordon ran dry on track and had to be pushed back by a safety truck.

When the field lined up again, Jimmie Johnson had gained nine positions. Mark Martin, second in points, was in ninth, having run up front all day.

The restart was waved off repeatedly due to cars running dry. Finally, on lap 188, the Green/White/Checker routine began. And, predictably, 38 cars tried to win the race in the final two laps.

Brian Vickers appeared to nudge Brad Keslowski, sending Keslowski into Kurt Busch, spinning him across the track. Martin Truex Jr. got bounced off the outside wall and shot sharply across the track to hit the right rear of Mark Martin, flipping Martin onto his roof and back to his wheels, ruining Martin’s chance for a top-five finish.

Chase contender Jeff Gordon was also caught up in the wreck. The final melee probably ended both Martin’s and Gordon’s chances for a championship this year. Jimmie Johnson somehow drove through it all—sheer luck—to finish sixth, increasing his points lead by cleverly not racing for 500 miles.

Jamie McMurray took the win, and to be fair, he had been contesting the lead throughout the race. It was not an undeserved win handed to a mid-pack non-contender, as has happened at other restrictor-plate races. (Matt Kenseth proved he was fast in the season’s second race in Fontana, but the Daytona 500 win was a gift.) But the race was also not really a race.

After the checkered flag fell, Markl martin and Ryan Newman both expressed displeasure with the race; not because they were wrecked out of it, but because the “race: was 180 laps of waiting and the rest was mostly run under yellow.

NASCAR has been seeing a gradual decline from its heyday a few seasons ago. Knowledgeable fans have ben complaining about the contrived nature of The Chase, the contrived nature and unnecessary dangers of restrictor-plate racing, the Car of Tomorrow, where the only difference between a Ford and a Chevy is a decal, and which teams have almost no freedom to modify to make faster.

NASCAR knows there are problems, but it has problems of its own: a combination of ego and fear.

For so long they have staged-managed the racing, they are afraid to admit they went too far, and they are even more afraid that whatever they do might make even more people angry (justifiably so; if whatever they did, did not Immediately result in a few excellent races, they would get nothing but even louder complaining and lower ratings.)

NASCAR, for all its falling ratings and shrinking attendance, is still the only national racing series making money, and that involves an intricate web of sponsors, teams, manufacturers, media, and fans of different persuasions. NASACR doesn't know if one tiny change might unravel the whole thing, leaving them looking like IRL.

NASCAR has to juggle the Chase, the CoT, the balance between "Beatin' and bangin'" and clean racing which might alienate a portion of fans, and the fear that without hype NASCAR would have only racing fans, of which there simply aren't enough.

Imagine if pro wrestling decided, no characters, no costumes, no choreography, just honest Olympic-style wrestling? The sport would cease to exist in two weeks.

NASCAR just doesn't know which part of the hype and the faking is too much, and which part is keeping the non-race NASCAR fans interested.

So today we have a race at Talladega, which everyone fan and driver dreaded and anticipated all season long, turning into a meaningless procession followed by two big crashes.

I must confess: I don’t know what the answer is. Tapered restrictor plates would allow better throttle response, but would that stop drivers from bump-drafting? And would it keep the field from racing in a pack at a speed so high that any error is guaranteed to be huge? Would slowing the field down enough to make the racing safe be boring to the fans? After all, the NASCAR (as opposed to racing) fans today are used to a lot of “action”: constant crashes, a lot of contact, “beatin’ and bangin’,” and will reach for the remote if the racing isn’t entertaining (or so NASCAR fears.)

Is there any way to do NASCAR-style race safely on a superspeedway? And will that offer NASCAR fans the entertainment they crave? Can NASCAR risk making changes to find out?

After Homestead, when Jimmie Johnson has won his fourth championship in a row, I guarantee a lot of NASCAR officials will be considering these questions.

The opinions expressed herein are solely those of the author and in no way reflect the views of The Epoch Times. Please send comments to james.fish@epochtimes.com.