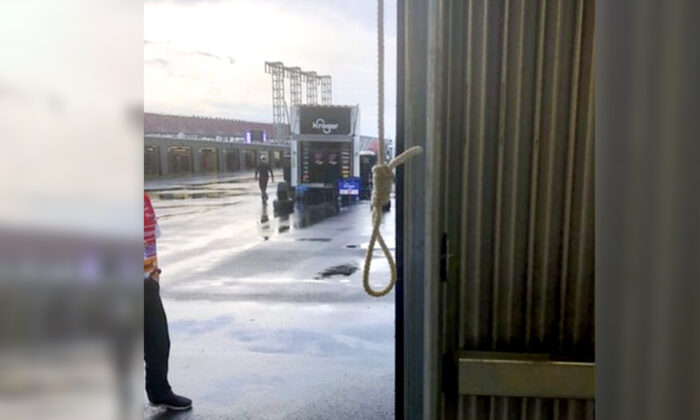 The noose found in the garage stall of Black driver Bubba Wallace at Talladega Superspeedway in Talladega, Ala., on June 21, 2020. (NASCAR via AP)
US News

NASCAR has released the first official image of the garage-style knot that was fashioned into what appears to be a noose inside Bubba Wallace’s garage at the Talladega Superspeedway, which sparked an internal investigation.

NASCAR President Steve Phelps said that “upon learning of and seeing the noose, our initial reaction was to protect our driver.”

“We’re living in a highly charged and emotional time. What we saw was a symbol of hate and was only present in one area of the garage and that was of the 43 car of Bubba Wallace. In hindsight, I should have used the word ‘alleged’ in our statement,” he added.

Phelps noted that the knot appeared to be a noose, adding that “with similar emotion, others across our industry and our media stood up to defend the NASCAR family.”

The FBI determined that the noose had been in the garage since October of last year, concluding that no federal hate crime occurred.

“As you can see from the photo, the noose was real, as was our concern for Bubba. … Our NASCAR family. Because they are part of the NASCAR family, too. We are proud to see so many stand up for what’s right,” Phelps added.

“After a thorough review of the facts, we have concluded that no federal crime was committed,” the statement said. The agency used “authentic video confirmed by NASCAR,” while it added that “nobody could have known that Mr. Wallace would be assigned to garage number 4 last week.” Wallace is an African-American NASCAR driver.

No charges will be filed in the case, the agency said.

After the FBI released its findings, Wallace said he was relieved but frustrated by the reaction after many people alleged he partook in a hoax and made comparisons to the Jussie Smollett case last year.

“I was relieved just like many others to know that it wasn’t targeted towards me,” Wallace said on the “Today” show. “But it’s still frustrating to know that people are always going to test you and always just going to try and debunk you and that’s what I’m trying to wrap my head around now.”

Wallace added that some wrongly said he found and reported the noose, adding that another staffer discovered it.