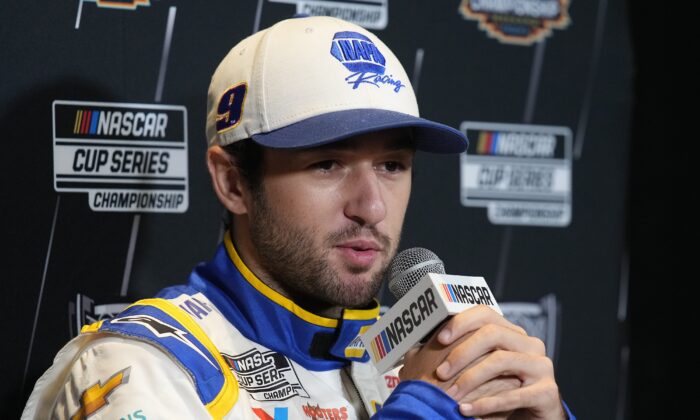 NASCAR Championship Pits Best at Hendrick vs. Best at Gibbs

The crowd erupted in cheers as the No. 9 Chevrolet was pushed into the bay. It was empty, but no one seemed to care all that much.

Everyone was just happy to be at the big show.

A year after the pandemic forced renovated Phoenix Raceway to host its first championship weekend in front of only 8,000 fans a day, the full $178 million facelift is on display. Every single allotted space has been sold for Sunday, when the Cup title will be decided in front of about 60,000 spectators.

They’ll bring their koozies, coolers, some will sit on Rattlesnake Hill, and, yes, some will even wear their “Let’s Go, Brandon” T-shirts despite NASCAR’s disapproval.

Elliott, Kyle Larson, Martin Truex Jr., and Denny Hamlin will try to make the season finale a race to remember, with one driving away with a Cup Series championship that will be impossible for him to forget.

This Sunday for NASCAR’s championship four is arguably one of the best yet under this winner-take-all format introduced in 2014.

Elliott is the reigning champion, NASCAR’s most popular driver and defending race winner, while 2017 champion Truex won at Phoenix this spring. They join three-time Daytona 500 winner and four-time championship loser Hamlin in chasing Larson, a nine-race winner this year and the FanDuel 2/1 favorite to win his first NASCAR title.

Take your pick of the most enticing storylines in the desert.

Hendrick Motorsports vs. Joe Gibbs Racing in a 2-on-2 battle for the trophy. The winner will drive either a Chevrolet (Hendrick) or a Toyota (Gibbs); Ford will be a championship spectator.

Or the in-house rivalry between Elliott and Larson for title of top dog at Hendrick Motorsports, the winningest team in NASCAR history and leader this season with 16 wins through 35 races.

Truex, a four-race winner this year back at Phoenix in the same Toyota he drove to the win in March, is the dark horse. His Gibbs teammate Hamlin is the enigma as he tries to win his first Cup in his fifth try.

Although he insists he is content with his resume even if he never wins a championship, Hamlin hinted he might turn in his car keys and follow buddy Michael Jordan’s lead by calling it quits if he does claim the title. Hamlin and Jordan are now partners in first-year team 23XI Racing, and Hamlin has cited scenes from the ESPN documentary “The Last Dance” that showcased Jordan’s drive.

“Jordan always said he had to come up with his own thing. He would come up with a [trash]-talking statement from a competitor that they didn’t say to just motivate him,” Hamlin said this week. “I feel the same way. Like, I want that. I want to get pushed. I don’t know what it is. I can’t explain it. I’m wired the same way.”

Hamlin declared he thrives amid chaos, the more drama the better, and he landed in the thick of it in last weekend’s elimination race. He fumed when spun from the lead at Martinsville Speedway by winner Alex Bowman, then was heavily booed by his Virginia home state crowd.

Hamlin called Bowman “a hack,” insulted Elliott’s fanbase, and soaked in the jeers from the crowd. Hamlin without a doubt was the cockiest of the four championship drivers leading into Sunday, undoubtedly soaking in his self-inflicted chaos.

Hamlin and Truex for sure can win the title, but Joe Gibbs Racing conceded its role as the underdog on Monday, the day after the final four was set. The oddsmakers agree: FanDuel lists Hamlin at 9/2 odds and Truex 49/10, with both Hendrick drivers rated higher.

But the Hendrick duo brings their own unique challenges.

For Larson, he has dominated the Cup Series and advanced to his first championship race in his comeback season from a nearly yearlong suspension. He almost destroyed his career early in the pandemic when he used the N-word while racing online, and he spent all but four races banished by NASCAR.

Rick Hendrick gave him a second chance once NASCAR reinstated him, and Larson watched Elliott win the championship 364 days ago from the Hendrick Motorsports control room on its North Carolina campus. Now he’s got a chance to dethrone Elliott and cap one of the best seasons in NASCAR history.

Larson actually has 10 wins, the non-points $1 million All-Star race isn’t counted in his total, and his 2,474 laps led this season broke Jeff Gordon’s 20-year record. He was the driver behind the wheel when Hendrick passed Petty Enterprises for most wins in NASCAR in May, and he wants to give Hendrick a 14th Cup title.

Larson knows a title won’t erase his 2020 mistake, but he has worked hard on and off the track to move past an incident he has blamed on naivety.

He is cheered wildly at tracks across the country and sometimes his ovation is louder than the one given to Elliott, the crown prince of the sport. Elliott hasn’t said so, but he can’t be thrilled that his year as reigning champion has been overshadowed by his new teammate and his future as Hendrick’s superstar now challenged.

But this weekend at Phoenix, Elliott was still the biggest star ahead of Sunday. Alan Gustafson, the crew chief who led Elliott to three wins in the final five races last year to claim their first Cup championship, knows if the title is taken on Sunday, it won’t be without a fight.

“I think great competitors find a way in whatever situation is presented to be successful and they make it happen,” Gustafson said. “Last year we got hot … this year, it’s been much more of a street fight. We’ve had to scratch and claw and just stay alive. I think Chase has done an amazing job of that and when the chips are down, that’s when the greatness comes out.”