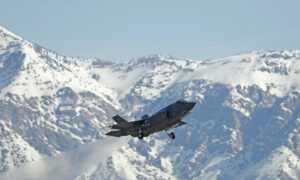 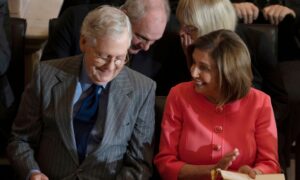 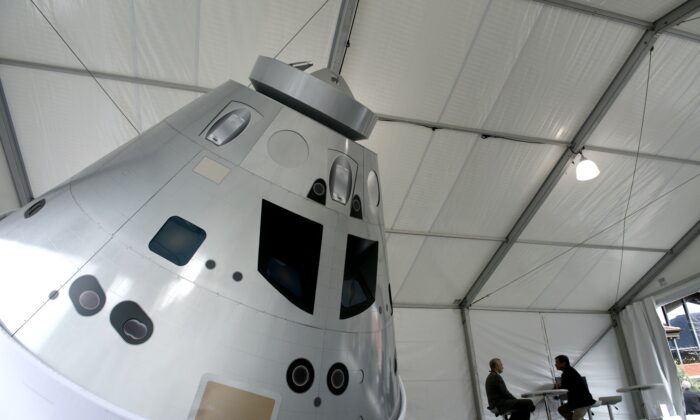 A model of the Orion capsule, manufactured by Lockheed Martin, at The Broadmoor in Colorado Springs, Colorado on April 9, 2019. (Jason Connolly/AFP via Getty Images)
Politics

NASA officials give such generous and unearned performance bonuses on the Orion space capsule development program that contractor ratings are all but meaningless, according to the agency’s inspector general (IG).

Sen. Joni Ernst (R-Iowa) believes the IG report points to the continuing need for a reform proposal she introduced in the Senate, the “Bogus Bonus Ban Act of 2019.”

Development of the Orion Multi-Purpose Crew Vehicle began in 2006 and, as part of the Artemis program, is currently scheduled to return Americans to the moon in 2024.

The effort has been plagued by schedule delays and cost increases from its inception, however, with a result that the 2024 target may well have to be delayed.

The last time American astronauts landed on the Moon was 1972 with Apollo 17. To date, the United States is the only nation to put astronauts on the Moon.

“Given the Orion program’s significant cost increases and schedule delays, we found that NASA has been overly generous with award fees provided to Lockheed,” the IG stated in a July 16 report.

“From contract inception in 2006 through January 2020, Lockheed received $740.9 million in award fees. We attribute these overly generous award fees to the subjective nature of award fee evaluations coupled with nebulous and dated criteria used by the program,” the IG wrote.

The result, according to the NASA watchdog, is that for “the Orion program and frequently other NASA programs … adjectival ratings such as ‘Excellent’ given to the contractor often do not accurately reflect performance shortfalls.

“At a minimum, we question $27.8 million in fees awarded to Lockheed from September 2006 to April 2015. In addition, we found the continued use of the ‘Award Fee for End-Item Contracts’ clause can serve as a disincentive to contractor performance because of the second opportunity to collect unearned fees once the end-item (in this case, the Orion capsule) is delivered.”

Such “End-Item” contracts allow contractors a second chance to earn performance fees it failed to gain initially. The NASA IG noted that “our concern is that if at the end of the next award fee period the Artemis II mission is successful, the agency may disregard Lockheed’s prior poor performance and give the contractor all or nearly all of the previously unearned fees, up to an additional $14.4 million.”

Artemis II is the first manned test flight of the Orion program, currently scheduled for 2023.

The excessive bonuses were one of multiple problems highlighted by the report, including the fact NASA officials have made it almost impossible to know the program’s actual costs.

“We found that NASA’s exclusion of more than $17 billion in Orion‐related costs has hindered the overall transparency of the vehicle’s complete costs,” the IG stated. Federal law requires transparency on program expenditures exceeding $250 million, but NASA gave Orion managers permission to exclude as much as $17.5 billion.

“Although these exclusions have been approved, the tailoring of these cost reporting requirements significantly limits visibility into the total amount spent on development and production efforts,” the IG stated.

While pointing to cost increases projected to total more than $1.4 billion, the IG also warned that “Orion is proceeding with production of crew capsules for future Artemis missions before completing key development activities, increasing the risk of additional cost growth and schedule delays as issues are discovered late in the development effort, potentially requiring costly rework.”

The Ernst proposal would reform the way federal managers throughout the government award bonuses to contractors with these provisions:

“Congress can bring the price of this moondoggle back to Earth by passing my bipartisan Bogus Bonus Ban bill. That would send taxpayers over the moon,” she said.