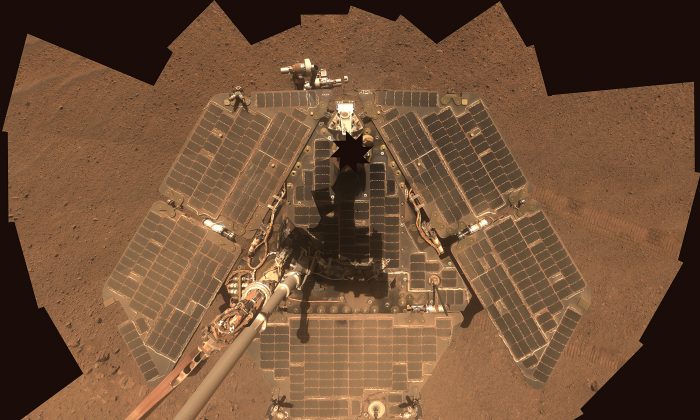 NASA’s Opportunity Rover Is Dead on Mars After 15 Years

NASA’s Opportunity Rover, which was launched in 2003, has ended its mission, said the U.S. space agency.

The rover spent about 15 years on the red planet. But eight months ago, Opportunity went silent, prompting NASA to declare it dead on Feb. 13.

Opportunity and its twin rover, Spirit, “have made Mars a familiar place,” Opportunity project manager John Callas told Space.com. “When we say, ‘our world,’ we’re no longer just talking about the Earth. We have to include parts of Mars as well.”

According to The Associated Press, flight controllers attempted to contact Opportunity several times, including the song, “I’ll Be Seeing You” by Billie Holiday. There was no response.

Amid the silence, Zurbuchen said, “It is therefore that I’m standing here with a sense of deep appreciation and gratitude that I declare the Opportunity mission as complete.”

“It’s an emotional time,” he concluded.

During its lifetime, Opportunity roamed some 28 miles around Mars.

Along with Spirit, Opportunity found evidence that water existed long ago on the planet, suggesting it may have been able to sustain life at one time.

“This is a hard day,” said project manager John Callas, reported AP, which also noted that it cost about $500,000 per month to operate the rover.

He said, “Even though it’s a machine and we’re saying goodbye, it’s still very hard and very poignant, but we had to do that. We came to that point.” He added: “It comes time to say goodbye.”

“It has been a fantastically successful mission which has completely outlived its shelf life,” said Dr. Andrew Coates, a planetary scientist, told the Guardian before adding that “one of those core things about Opportunity was it landed in this crater which was in sight of sedimentary types of rocks and that was the first time that sort of thing had been seen on Mars.”

Coates noted that the next step is to “drill and look for signs of life” on Mars.

On May 30, NASA’s Mars Reconnaissance Orbiter discovered a dust storm heading to Opportunity, and over the next few days, the large storm covered Opportunity’s solar panels with dust.

“The storm is one of the most intense ever observed on the Red Planet. As of June 10, it covered more than 15.8 million square miles—about the area of North America and Russia combined,” NASA said at the time. “It has blocked out so much sunlight, it has effectively turned day into night for Opportunity, which is located near the center of the storm, inside Mars’ Perseverance Valley.”

Spirit, meanwhile, died in 2010 after it got stuck in a sand trap at an angle that prevented the charging of its batteries.

As of 2018, the Curiosity rover and InSight lander are still operational on Mars. NASA has said it is planning to send another rover to Mars in 2020.