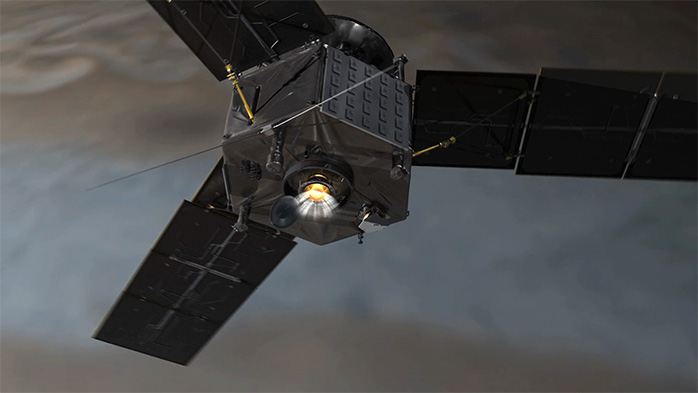 After five years and a 1.8 billion-mile journey through the solar system, NASA’s Juno spacecraft is about to perform the most dangerous part of the mission—enter the orbit around Jupiter.

Juno should orbit Jupiter 37 times in the next two years and send back to Earth new data about what’s going on beneath the thick clouds that shroud the gas giant.

To do that, the craft has to dramatically slow down its approach, otherwise, it will just fly by. For that reason, Juno will turn around and burn its main engine for about 35 minutes. That should slow the craft down so it can be caught by the planet’s gravity.

“If the Jupiter Orbit Insertion burn fails to insert the spacecraft into orbit around Jupiter, there will be no science mission,” NASA states.

Approaching Jupiter can be treacherous. The planet spins 28 times faster than Earth—over 28,000 miles per hour. Any rock that get caught in the planet’s powerful gravity will swirl around at an incredible speed and carry certain doom if it hits Juno. Also, Jupiter has an incredibly strong magnetic field that Juno will have to withstand—its instruments are protected with titanium shielding.

The craft won’t be transmitting to Earth during the orbit entering phase, but NASA planned it so it can be observed from Earth.

The space agency offers an app that simulates a real-time view from the space craft. You can download it here.

Juno should first enter a very long elliptical orbit that takes it very close to Jupiter (under 3000 miles) on one end and very far from the planet on the other. After two such long orbits, each taking over 53 days, Juno should adjust to a shorter 14-day orbit. In February 2018, after 37 orbits in total, the craft will be disposed off by letting it descend towards the planet, ending the $1.1 billion mission.

Some things we should learn from Juno include: How much water is in Jupiter’s atmosphere, whether it has a solid core, and whats going on deep inside its clouds.