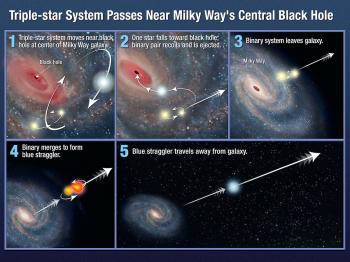 This illustration shows one possible mechanism for how the star HE 0437-5439 acquired enough energy to be ejected from our Milky Way galaxy. In this scenario, a triple-star system, consisting of a close binary system and another outer member bound to the group, is orbiting near the galaxy's monster black hole. (NASA, ESA, and A. Feild (STScI)
Science

Reid Schram
View profile
Follow
biggersmaller
Print
Using the Hubble Telescope, NASA researchers have spotted HE 0437-5439, a blue star, speeding away from the Milky Way at a whopping 1.6 million mph. At this speed, HE 0437-5439 would cover the distance from earth to the moon in nine minutes, which is also three times the speed our sun orbits the center of the Milky Way. Only 16 of these hyperfast stars have ever been detected, and HE 0437-5439 is now believed to have been ejected from the core of the milky way based on its trajectory, NASA said in a recent press release.

"These exiled stars are rare in the Milky Way's population of 100 billion stars. For every 100 million stars in the galaxy, there lurks one hypervelocity star." said Warren Brown, a NASA researcher heavily involved with Hubble, in a press release.

A consensus among scientists has only now emerged, after two long years of debate about the star’s origins.

Scientists now believe the blue star is what is left of a trio of stars that began interacting with the black hole that resides at the center of our Milky Way. The Hubble results suggest that starting about 100 million years ago, the triplet system of stars wandered too close to the center of the milky way and had one of its component stars stripped off, and in the process, the doomed star's momentum was transferred to the other two, allowing them to reach the escape velocity. These two stars then merged into one blue star. This theory explains how the escaping star is a “blue strangler.” Most blue stars only live for about 20 million years. This fact perplexed scientists because based on the velocity of this cosmic speedster, it should be about 100 million years old.