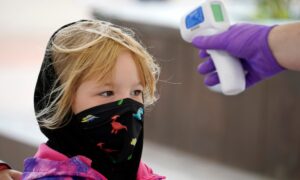 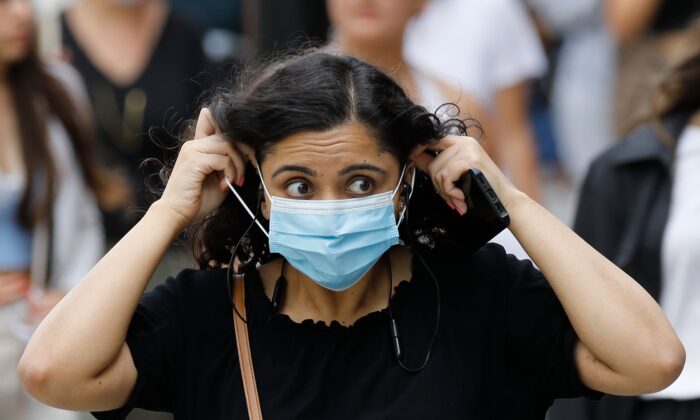 A shopper adjusts her mask on Oxford Street in London on July 24, 2020. (Tolga Akmen/AFP via Getty Images)
UK

A nasal spray that slows CCP (Chinese Communist Party) virus infection has been developed by researchers at the University of Birmingham who say it could be approved and mass-produced within weeks.

In a study published on Thursday which has yet to be peer-reviewed, they claim to have developed the spray from compounds already widely approved by regulatory bodies and used in medical devices, medicines, and even food products.

They say that the spray is not intended to replace masks or hand-washing, but to provide an additional safeguard in crowded spaces such as classrooms and airplanes.

“Although our noses filter thousands of litres of air each day, there is not much protection from infection, and most airborne viruses are transmitted via the nasal passage,” said study co-author Professor Liam Grover in a statement. “The spray we have formulated delivers that protection but can also prevent the virus from being passed from person to person.”

According to the researchers, the compound is designed to evenly line the nasal cavity, sticking to nose cells, and to then coat incoming virus particles in an anti-viral compound.

They claim it can reduce the viral load in the body, and to thus reduce the risk of transmission to others.

In their study, they found that infection was inhibited for up to two days in cultures treated by their solution.

The compound is made from two polysaccharide polymers. The first is an antiviral agent called carrageenan, commonly used as a thickening agent in food. The second is called gellan, which was chosen for its ability to stick to cells inside the nose.

“This spray is made from readily available products that are already being used in food products and medicines and we purposely built these conditions into our design process,” said Dr. Richard Moakes, lead author of the paper. “It means that, with the right partners, we could start mass production within weeks.”

“Products like these don’t replace existing measures such as mask-wearing and hand-washing, which will continue to be vital to preventing the spread of the virus,” said Moakes. “What this spray will do, however, is add a second layer of protection to prevent and slow virus transmission.”

The research comes as Oxford University announced its AstraZeneca vaccine appears to be effective across all age ranges, including older adults.

Creating a vaccine that’s effective in older adults is typically more difficult, but is important in tackling the CCP virus.