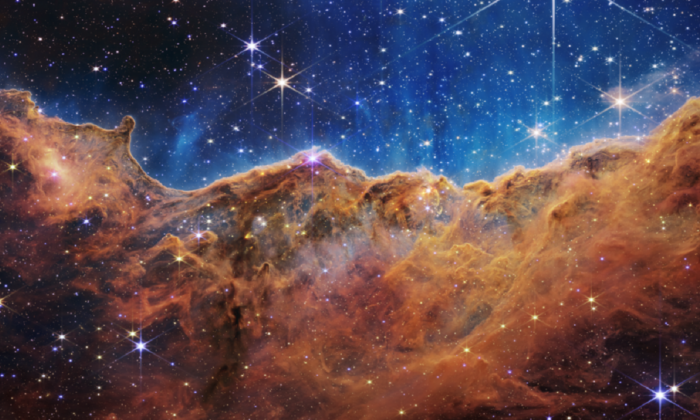 The National Aeronautics and Space Administration (NASA) on July 12 unveiled more images captured by the James Webb Space Telescope, including one showing a cluster of galaxies.

One of the new pictures shows the edge of a star-forming region called NGC 3324, located in the Carina Nebula.

“This stunning vista of the cosmic cliffs of the Carina Nebula reveals new details about this vast, stellar nursery,” Amber Straughn, a NASA astrophysicist, said during an unveiling event. “Today, for the first time, we’re seeing brand new stars that were completely hidden from our view.”

Scientists said the image will help them explore how stars are formed.

Stephan’s Quintet had been captured before—it was shown in “It’s a Wonderful Life”—but the Webb telescope image shows it “in a level of detail never seen before,” according to NASA.

The image shows a group of five galaxies clustered together.

At the time it was captured, one of the galaxies, NGC 7318B, was crashing into the others.

In a set of images from the telescope, the Southern Ring Nebula, or NGC 3132, is seen in detail.

“This is a planetary nebula. It’s caused by a dying star that has expelled a large fraction of its mass in successive waves,” said Karl Gordon, a NASA astronomer.

The nebula is located about 2,500 light-years away.

Astronomers hope to learn more about planetary nebulae by examining the images.

The final image released on Tuesday shows the atmosphere surrounding a gas giant planet as it orbits a star located about 1,150 light-years away.

The image provides evidence of clouds and haze in the atmosphere around WASP-96 b, an exoplanet in the Milky Way, indicating there could be water there.

“It’s exciting because it covers infrared wavelengths of light that we have not had access to before,” NASA astrophysicist Knicole Colon said.

The spectrum captured will enable researchers to measure the amount of water vapor in the atmosphere, as well as take other measurements.

The first image from the telescope was unveiled on Monday by President Joe Biden. It showed the distant universe.

NASA Administrator Bill Nelson told Biden that if he held one grain of sand at arm’s length, “that is the part of the universe that you’re seeing” in the image.