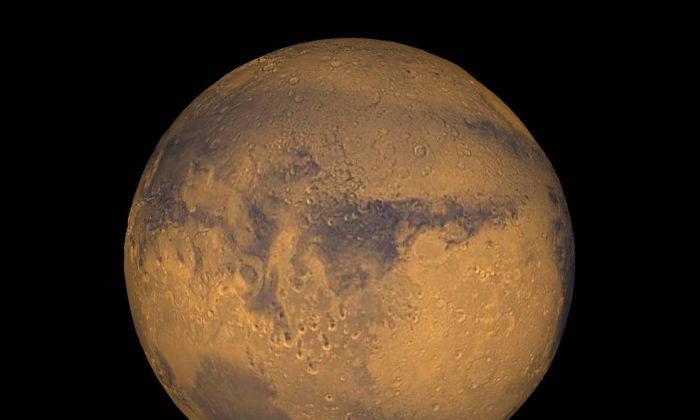 NASA Expected to Confirm Discovery of Water on Mars

NASA said in a post this week that it would unveil “a major science finding” in a briefing on Monday about the solving of a “Mars Mystery.” The announcement will likely be related to the existence of water on Mars.

Three of the participants in the planned news conference are co-authors of a forthcoming paper, “Spectral Evidence for Hydrated Salts in Seasonal Brine Flows on Mars.”

The existence of water on Mars is directly tied to the question of whether there is, or has been, life on the red planet, since liquid water and organic compounds, which were discovered on Mars late last year, are two of the fundamental building blocks of life.

Geological remnants that resemble riverbeds and channels suggest that water existed on Mars in the distant past, but there’s been scant evidence that water exists in the present day.

The paper, to be published in Nature Geoscience, analyzes spectral visual data gathered by the Mars Reconnaissance Orbiter to conclude that the recurring slope lines that have observed on Martian craters during the warmest months of the year are, in fact, the result of water streams that contain high levels of salt.

“Pure water would rapidly evaporate and/or freeze on the present-day surface of Mars at most times and places; however brines are far less volatile compared to pure water due to their lower freezing points and evaporation rate,” the paper states. “Various salts (e.g. sulfates, chlorides and perchlorates) have been detected on the surface of Mars from remote and in situ investigations [e.g. 3-5]. These salts can lower the freezing point of water by up to 80 [Kelvin].”

Although the analysis confirms that water does exist on Mars’ surface, the authors are uncertain as to the source of the water, and have presented three possible causes: melting of ice on and below the surface, salt deposits absorbing moisture from the atmosphere, and seasonal discharge of local aquifers.