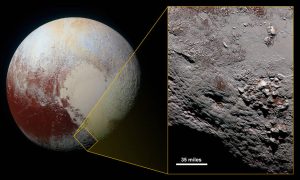 Pluto just never ceases to fascinate. NASA scientists recently discovered the dwarf planet is home to hills that float and move about.

The unique geological features were spotted in the region unofficially known as Sputnik Planum. Individually they measure in the one to several miles wide range, but often appear in clusters as shown in an image released by NASA. One of the larger of the groupings is estimated to cover a 37 by 22 mile area.

Their floating and mobile nature is a matter of composition. Experts believe the hills are made of water ice, while the surface beneath them is comprised of frozen nitrogen. Given the difference in densities between the two, the hills behave like icebergs in an ocean.

New Horizons took the image showing these features as it neared its closest approach to Pluto. At the time the photo was snapped, the craft was roughly 10,000 miles from the surface.