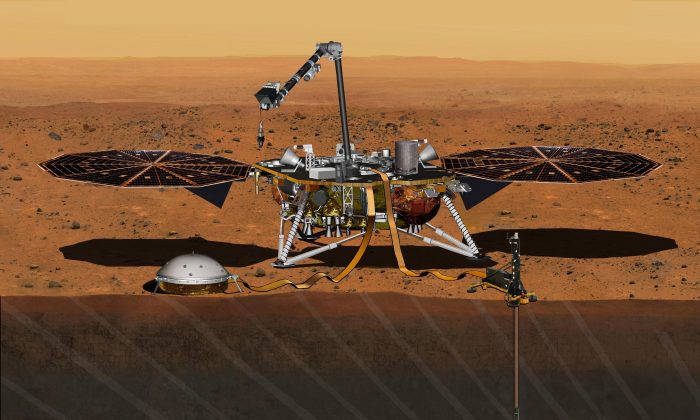 FILE - This August 2015 artist's rendering provided by NASA/JPL-Caltech depicts the InSight Mars lander studying the interior of Mars. On Wednesday, March 9, 2016, NASA said it's shooting for a 2018 launch of the InSight spacecraft. The robotic lander was supposed to lift off in March 2016, but was grounded in December by a leak in a French instrument. Project managers said the device should be redesigned in time. (NASA/JPL-Caltech via AP)
Science

Instead of scrapping the grounded Mars InSight spacecraft, the space agency announced Wednesday it’s shooting for a 2018 launch. The robotic lander was supposed to lift off this month, but ended up sidelined in December by a leak in a key French instrument. Project managers said the device should be redesigned in time.

Opportunities to launch to Mars arise just every two years, based on the alignment of Earth and its neighbor.

May 2018 represents the next available launch window. Opportunities to launch to Mars arise just every two years, based on the alignment of Earth and its neighbor.

The InSight spacecraft aims to study the interior of Mars by drilling deep within. The sensors for the French seismometer need to operate in a vacuum chamber in order to measure subtle ground movements. The vacuum chamber was leaking. The other main science instrument, a German heat-flow probe, was ready to fly.

It’s unknown how much the two-year delay will cost. NASA’s only other option was to kill the project.

John Grunsfeld, head of NASA’s science mission directorate, said the scientific goals are compelling and the repair plans are sound. The Jet Propulsion Laboratory in Pasadena, California, will take over the redesign, building and testing of the vacuum chamber, while the French space agency focuses on the science instrument itself.

“The quest to understand the interior of Mars has been a long-standing goal of planetary scientists for decades,” Grunsfeld said in a statement. “We’re excited to be back on the path for a launch, now in 2018.”

Another NASA Mars lander—this one a car-sized, wheeled rover—is scheduled for a 2020 launch.

The red planet already is teeming with active spacecraft, including NASA’s Opportunity and Curiosity rovers on the surface, and Odyssey, Mars Reconnaissance Orbiter and Maven orbiter from high above. Europe has its Express spacecraft in orbit around the red planet.

Europe is launching another Mars mission Monday from Kazakhstan—an orbiter for measuring atmospheric gases and a lander collectively known as ExoMars 2016.