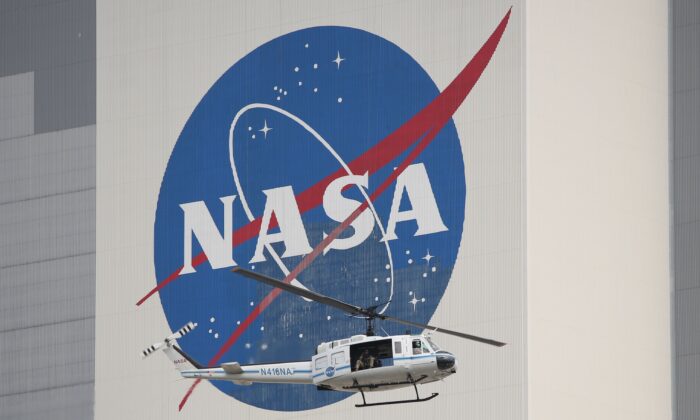 A NASA security helicopter flies past the Vehicle Assembly Building on launch day at the Kennedy Space Center in Florida on May 26, 2020. (GREGG NEWTON/AFP via Getty Images)
Infiltrating the West

A senior NASA scientist has been sentenced to 30 days in prison, months after he pleaded guilty to lying about his ties to a program backed by the Chinese regime designed to harvest talents from the West and transfer intellectual property to China.

Meyya Meyyappan, 66, of Pacifica, California, was sentenced on June 16 for making false statements to the FBI, NASA’s Office of Inspector General, and the U.S. Attorney for the Southern District of New York, the Justice Department announced in a news release.

Meyyappan joined NASA in 1996 and had been the chief scientist for exploration technology at NASA’s Ames Research Center in California’s Silicon Valley since 2006.

Prosecutors said that Meyyappan had participated in China’s state-run Thousand Talents Plan. The Thousand Talents program has recruited thousands of experts globally since 2008, according to Chinese state media reports. He held positions at universities in China, South Korea, and Japan without NASA’s knowledge, according to prosecutors.

NASA prohibits “any outside employment activities” without approval, including engagement as a speaker or teacher, U.S. attorney Audrey Strauss said in the court complaint. As a NASA employee, Meyyappan is also required to annually report any additional income exceeding $5,000, gifts, and travel reimbursements.

Meyyappan failed to disclose these activities to NASA. Around 2016, he applied for and was accepted into the Thousand Talents Plan. Through the program, he traveled to China and recommended other candidates into the program, prosecutors said. From 2014, he worked as a visiting professor at a Chinese research university. He gave lectures, wrote research papers, and received compensation for his travel.

Meyyappan denied his membership in the Thousand Talents Plan and his employment at Chinese institutions when federal investigators questioned him in October 2020.

“As a senior NASA scientist with access to sensitive and confidential U.S. government technologies and intellectual property, Meyya Meyyappan was understandably subject to restrictions regarding outside employment and compensation,” Strauss said in a statement.

The privilege of access to cutting-edge U.S. technologies and intellectual property comes with the critical responsibility of protecting their secrecy, Strauss noted.

“Meyyappan betrayed that trust, by failing to disclose his foreign activities and then compounding his mistakes by lying to the FBI and NASA. He has now been sentenced to time in federal prison for his unlawful conduct,” he said.

The Chinese regime’s Thousand Talents Plan has come under close U.S. scrutiny over threats to the country’s national security.

The plan was enacted by Beijing in 2008, and it’s the Chinese state’s most prominent recruitment program. Hundreds of similar operations exist at the central and local government levels, aiming to attract promising overseas Chinese and foreign experts in the fields of science and technology to fuel the ruling Chinese Communist Party’s innovation drive.