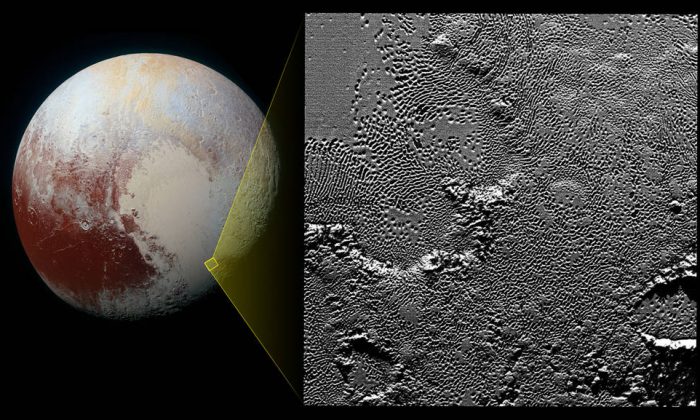 NASA has released new images of the surface of Pluto and its heart-shaped region, known as the Tombaugh Regio.

The U.S. space agency says that the pictures, taken on July 14 by the New Horizons spacecraft but just published recently, are the highest resolution images ever obtained of the intricate pattern of “pits” across the region.

“Mission scientists believe these mysterious indentations may form through a combination of ice fracturing and evaporation. The scarcity of overlying impact craters in this area also leads scientists to conclude that these pits–typically hundreds of yards across and tens of yards deep–formed relatively recently,” NASA said.

“Their alignment provides clues about the ice flow and the exchange of nitrogen and other volatile materials between the surface and the atmosphere.”

The sequence of pictures was taken by New Horizons as the spacecraft passed within 9,550 miles of the planet.

Another image released by NASA on December 10 shows the edge of the “badlands” northwest of the informally named Sputnik Planum, also near the shoreline of the “heart” feature.

The large image combines multiple pictures taken by New Horizons from around 10,000 miles away.