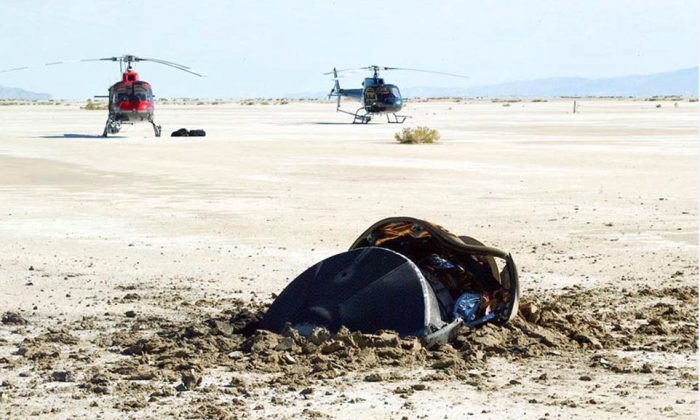 A flying saucer crash-landed in the Utah desert. The saucer turned out to be the Genesis sample return capsule, part of a human-made robot Genesis spaceship launched in 2001 by NASA itself to study the sun and the photo was posted on Nov. 4, 2018. (USAF 388th Range Sqd., Genesis Mission, NASA)
US News

NASA has for the first time shared photographs of a “flying saucer” that crash-landed in a Utah desert 14 years ago.

“No space aliens were involved,” NASA noted on its website after posting the photo on Nov. 4.

“The saucer, … was the Genesis sample return capsule, part of a human-made robot Genesis spaceship launched in 2001 by NASA itself to study the sun,” the space agency said.

‘Tracked by Radar and Chased by Helicopters’

NASA said the spacecraft was tracked by radar and chased by helicopters before it crash-landed in the Utah desert.

The agency noted that since its parachute did not open as planned, it took an “unexpectedly hard landing,” hitting the ground at more than 186 mph.

“On 8 September 2004 the SRC entered Earth’s atmosphere as planned, but its gravity switches were oriented incorrectly as the result of a design error and the parachute system failed to deploy,” NASA said.

Despite the craft’s hard landing, solar wind samples onboard the craft remained sufficiently intact for scientists to be able to analyze, NASA said.

“The materials we used in the Genesis collector arrays had to be physically strong enough to be launched without breaking; retain the sample while being heated by the Sun during collection; and be pure enough that we could analyze the solar wind elements after Earth-return,” project scientist Amy Jurewicz explained on Sept. 3, 2004.

The agency added that Genesis was able to capture solar wind particles that would otherwise be deflected by the planet’s magnetic field. NASA said it has already learned new “new details about the composition of the Sun and how the abundance of some types of elements differ across the Solar System,” thanks to the spacecraft.

“These results have provided intriguing clues into details of how the Sun and planets formed billions of years ago,” NASA added.

Launched on Aug. 8, 2001, the Genesis mission was NASA’s ambitious effort to send a spacecraft into our home star’s solar wind, gather samples, and return them to Earth.

In order to chemically model the processes associated with the transformation of the solar nebula into our solar system, NASA scientists intended for Genesis to collect samples of that original nebula with the hope of using them as a baseline from which they could track changes.

“The sun houses more than 99 percent of the material currently in our Solar System, so it’s a good idea to get to know it better,” Genesis principal investigator Don Burnett from California Institute of Technology said in 2011.

Solar physics researchers are said to be relying on Genesis sample data to develop an understanding of how material is ejected from the sun.

Within three years, a series of papers were published on the Genesis findings.

NASA reported that the mission has allowed researchers to learn unprecedented details about the elemental differences between the sun and the inner planets of the Solar System.

“We found that Earth, the moon, as well as Martian and other meteorites, which are samples of asteroids, have a lower concentration of the O-16 than does the sun,” said Kevin McKeegan, a Genesis co-investigator from UCLA, and the lead author of one of two scientific papers published on the matter, NASA said. “The implication is that we did not form out of the same solar nebula materials that created the sun — just how and why remains to be discovered.”

“We can expect more work on both solar, cosmochemical, and planetary science in the future,” NASA added.