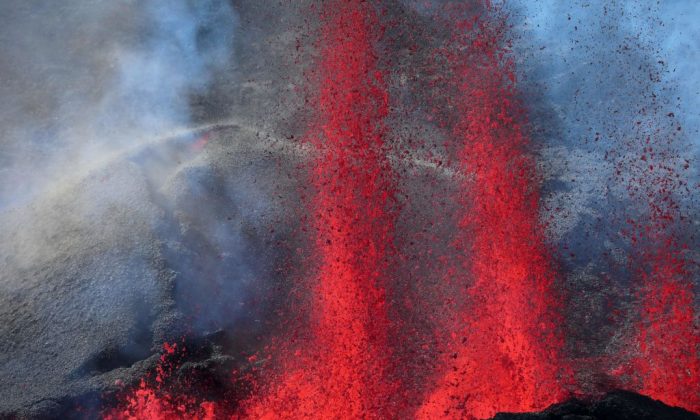 Which threat is greater for humanity than comets and asteroids crashing from outer space?

According to one scientist from NASA’s Advisory Council on Planetary Defense, it’s a supervolcano sitting beneath one of the most beautiful places in America and the world—Yellowstone National Park.

A swarm of earthquakes hit the Yellowstone region this year, raising further fears of an apocalyptic scenario. If the volcano explodes, a nuclear winter would follow and may cause humanity to go extinct through starvation.

So instead of tinkering with ways to protect us from asteroids, NASA has been working on a way to save the world from Yellowstone.

Brian Wilcox of NASA’s Jet Propulsion Laboratory sent the details of the plan to the BBC, revealing to the world for the first time the agency’s ambitious yet convincingly practical plan.

Underneath Yellowstone park is a giant chamber of magma that heats up over time. The only way it is cooled is with water that seeps through the cracks in the earth. The water is heated up and returns to the surface, accounting for the geysers and hot springs throughout Yellowstone National Park.

With that in mind, NASA started thinking of ways to cool down the beast. The first plan was to literally flood the plateau with water, but this was deemed impossible, since it would be too hard to convince politicians to use scarce water that way.

Instead, the team figured that drilling a 10 kilometer hole into the volcano and cycling water through it would do the job. The water would be pumped at high pressure, enter the crust at outdoor temperatures, get heated to 662 F inside, and return to the surface.

The plan’s most convincing aspect is that the hot water extracted from the depths of the volcano this way can be used to generate electricity at an extremely competitive price.

“Through drilling in this way, it could be used to create a geothermal plant, which generates electric power,” Wilcox said.

“You would have to give the geothermal companies incentives to drill somewhat deeper and use hotter water than they usually would, but you would pay back your initial investment, and get electricity, which can power the surrounding area for a period of potentially tens of thousands of years. And the long-term benefit is that you prevent a future supervolcano eruption, which would devastate humanity,” he added.

The scientists also realized that drilling into a giant magma pit waiting to burst comes with its own dangers.

“The most important thing with this is to do no harm,” Wilcox said.

The NASA plan instead calls for drilling into the side of the volcano and gathering heat from beneath the magma chamber.

“This way you’re preventing the heat coming up from below from ever reaching the top of the chamber, which is where the real threat arises,” Wilcox said.

The project is in no way a quick fix. It would take hundreds if not thousands of years to cool the volcano to a point where it is no longer volatile. But that’s not stopping NASA’s enthusiasm.

“With a project like this, you’d start the process and the main ongoing benefit you’d see in everyday terms is this new supply of electrical power,” Wilcox said.

The idea can also be applied to the other 20 supervolcanos sprinkled around the earth, creating geothermal plants that can generate enough electricity to power the entire earth for thousands of years.

“When people first considered the idea of defending the Earth from an asteroid impact, they reacted in a similar way to the supervolcano threat. People thought, ‘As puny as we are, how can humans possibly prevent an asteroid from hitting the Earth?’ Well, it turns out if you engineer something, which pushes very slightly for a very long time, you can make the asteroid miss the Earth,'” Wilcox said.

“So the problem turns out to be easier than people think. In both cases it requires the scientific community to invest brain power and you have to start early,” he added. “But Yellowstone explodes roughly every 600,000 years, and it is about 600,000 years since it last exploded, which should cause us to sit up and take notice.”