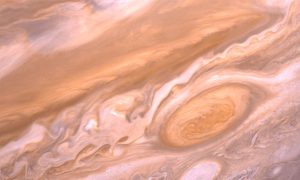 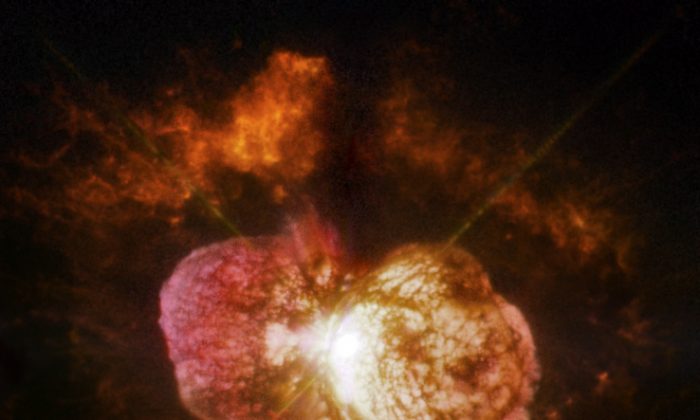 Eta Carinae's great eruption in the 1840s created the billowing Homunculus Nebula, imaged here by Hubble. Now about a light-year long, the expanding cloud contains enough material to make at least 10 copies of our sun. Astronomers cannot yet explain what caused this eruption. (NASA, ESA, and the Hubble SM4 ERO Team)
Science

Eta Carinae, the most luminous and massive stellar system within 10,000 light-years of Earth, is known for its surprising behavior, erupting twice in the 19th century for reasons scientists still don’t understand. A long-term study led by astronomers at NASA’s Goddard Space Flight Center in Greenbelt, Maryland, used NASA satellites, ground-based telescopes and theoretical modeling to produce the most comprehensive picture of Eta Carinae to date. New findings include Hubble Space Telescope images that show decade-old shells of ionized gas racing away from the largest star at a million miles an hour, and new 3-D models that reveal never-before-seen features of the stars’ interactions.

“We are coming to understand the present state and complex environment of this remarkable object, but we have a long way to go to explain Eta Carinae’s past eruptions or to predict its future behavior,” said Goddard astrophysicist Ted Gull, who coordinates a research group that has monitored the star for more than a decade.

Located about 7,500 light-years away in the southern constellation of Carina, Eta Carinae comprises two massive stars whose eccentric orbits bring them unusually close every 5.5 years. Both produce powerful gaseous outflows called stellar winds, which enshroud the stars and stymy efforts to directly measure their properties. Astronomers have established that the brighter, cooler primary star has about 90 times the mass of the sun and outshines it by 5 million times. While the properties of its smaller, hotter companion are more contested, Gull and his colleagues think the star has about 30 solar masses and emits a million times the sun’s light.

Speaking at a press conference at the American Astronomical Society meeting in Seattle on Wednesday, the Goddard researchers discussed recent observations of Eta Carinae and how they fit with the group’s current understanding of the system.

At closest approach, or periastron, the stars are 140 million miles (225 million kilometers) apart, or about the average distance between Mars and the sun. Astronomers observe dramatic changes in the system during the months before and after periastron. These include X-ray flares, followed by a sudden decline and eventual recovery of X-ray emission; the disappearance and re-emergence of structures near the stars detected at specific wavelengths of visible light; and even a play of light and shadow as the smaller star swings around the primary.

During the past 11 years, spanning three periastron passages, the Goddard group has developed a model based on routine observations of the stars using ground-based telescopes and multiple NASA satellites. “We used past observations to construct a computer simulation, which helped us predict what we would see during the next cycle, and then we feed new observations back into the model to further refine it,” said Thomas Madura, a NASA Postdoctoral Program Fellow at Goddard and a theorist on the Eta Carinae team.

According to this model, the interaction of the two stellar winds accounts for many of the periodic changes observed in the system. The winds from each star have markedly different properties: thick and slow for the primary, lean and fast for the hotter companion. The primary’s wind blows at nearly 1 million mph and is especially dense, carrying away the equivalent mass of our sun every thousand years. By contrast, the companion’s wind carries off about 100 times less material than the primary’s, but it races outward as much as six times faster.

Madura’s simulations, which were performed on the Pleiades supercomputer at NASA’s Ames Research Center in Moffett Field, California, reveal the complexity of the wind interaction. When the companion star rapidly swings around the primary, its faster wind carves out a spiral cavity in the dense outflow of the larger star. To better visualize this interaction, Madura converted the computer simulations to 3-D digital models and made solid versions using a consumer-grade 3-D printer. This process revealed lengthy spine-like protrusions in the gas flow along the edges of the cavity, features that hadn’t been noticed before.

“We think these structures are real and that they form as a result of instabilities in the flow in the months around closest approach,” Madura said. “I wanted to make 3-D prints of the simulations to better visualize them, which turned out to be far more successful than I ever imagined.” A paper detailing this research has been submitted to the journal Monthly Notices of the Royal Astronomical Society.

The team detailed a few key observations that expose some of the system’s inner workings. For the past three periastron passages, ground-based telescopes in Brazil, Chile, Australia and New Zealand have monitored a single wavelength of blue light emitted by helium atoms that have lost a single electron. According to the model, the helium emission tracks conditions in the primary star’s wind. The Space Telescope Imaging Spectrograph (STIS) aboard Hubble captures a different wavelength of blue light emitted by iron atoms that have lost two electrons, which uniquely reveals where gas from the primary star is set aglow by the intense ultraviolet light of its companion. Lastly, X-rays from the system carry information directly from the wind collision zone, where the opposing winds create shock waves that heat the gas to hundreds of millions of degrees.

“Changes in the X-rays are a direct probe of the collision zone and reflect changes in how these stars lose mass,” said Michael Corcoran, an astrophysicist with the Universities Space Research Association headquartered in Columbia, Maryland. He and his colleagues compared periastron emission measured over the past 20 years by NASA’s Rossi X-ray Timing Explorer, which ceased operation in 2012, and the X-ray Telescope aboard NASA’s Swift satellite. In July 2014, as the stars rushed toward each other, Swift observed a series of flares culminating in the brightest X-ray emission yet seen from Eta Carinae. This implies a change in mass loss by one of the stars, but X-rays alone cannot determine which one.

Goddard’s Mairan Teodoro led the ground-based campaign tracking the helium emission. “The 2014 emission is nearly identical to what we saw at the previous periastron in 2009, which suggests the primary wind has been constant and that the companion’s wind is responsible for the X-ray flares,” he explained.

After NASA astronauts repaired the Hubble Space Telescope’s STIS instrument in 2009, Gull and his collaborators requested to use it to observe Eta Carinae. By separating the stars’ light into a rainbow-like spectrum, STIS reveals the chemical make-up of their environment. But the spectrum also showed wispy structures near the stars that suggested the instrument could be used to map a region close to the binary system in never-before-seen detail.

STIS views its targets through a single narrow slit to limit contamination from other sources. Since December 2010, Gull’s team has regularly mapped a region centered on the binary by capturing spectra at 41 different locations, an effort similar to building up a panoramic picture from a series of snapshots. The view spans about 430 billion miles (670 billion km), or about 4,600 times the average Earth-sun distance.

The resulting images, revealed for the first time on Wednesday, show that the doubly ionized iron emission comes from a complex gaseous structure nearly a tenth of a light-year across, which Gull likens to Maryland blue crab. By stepping through the STIS images, vast shells of gas representing the crab’s “claws” can be seen racing away from the stars with measured speeds of about 1 million mph (1.6 million km/h). With each close approach, a spiral cavity forms in the larger star’s wind and then expands outward along with it, creating the moving shells.

“These gas shells persist over thousands of times the distance between Earth and the sun,” Gull explained. “Backtracking them, we find the shells began moving away from the primary star about 11 years or three periastron passages ago, providing us with an additional way to glimpse what occurred in the recent past.”

When the stars approach, the companion becomes immersed in the thickest part of the primary’s wind, which absorbs its UV light and prevents the radiation from reaching the distant gas shells. Without this energy to excite it, the doubly ionized iron stops emitting light and the crab structure disappears at this wavelength. Once the companion swings around the primary and clears the densest wind, its UV light escapes, re-energizes iron atoms in the shells, and the crab returns.

Both of the massive stars of Eta Carinae may one day end their lives in supernova explosions. For stars, mass is destiny, and what will determine their ultimate fate is how much matter they can lose — through stellar winds or as-yet-inexplicable eruptions — before they run out of fuel and collapse under their own weight.

For now, the researchers say, there is no evidence to suggest an imminent demise of either star. They are exploring the rich dataset from the 2014 periastron passage to make new predictions, which will be tested when the stars again race together in February 2020.

NASA is exploring our solar system and beyond to understand the universe and our place in it. We seek to unravel the secrets of our universe, its origins and evolution, and search for life among the stars.