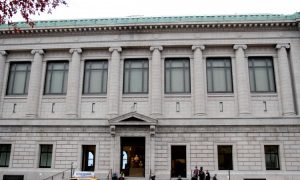 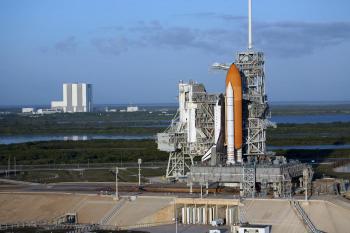 GETTING READY: Space shuttle Atlantis atop the mobile launcher platform sits on Launch Pad 39A at NASA's Kennedy Space Center in Florida on April 17. (NASA/Dimitri Gerondidakis)
US

NEW YORK—NASA's Atlantis Space Shuttle will embark on one of its final missions next week, when its crew of five will service the Hubble Space Telescope and add some new gadgets that will allow it to see where no telescope has seen before.

The Atlantis shuttle mission will be used for an estimated nine more missions before the fleet goes into retirement. Afterwards, NASA will work on more epic goals, including the building of a lunar outpost and a mission to Mars.

“We’re a nation that explores, and if we want to continue to explore one of the next big steps is how to live off the planet,” said NASA spokesperson Lynnette Madison. “We have to learn to go further and the closest place to go to is the moon.”

According to Madison, the first lunar mission of the next fleet will be launched in June when a robotic drone will map out the moon in a reconnaissance mission.

Madison said that before the next manned lunar mission to the moon launches in 2020, the “first goal is to continue missions to the International Space Station for a few years.”

Moon voyages will begin anew with short missions, or "sorties," that will each last seven days. “Once they get sorties established they’ll begin setting up the outpost,” Madison said, adding that the targeted location of the missions will be much more difficult to reach than in previous missions.

The Aries 1 rocket will take the astronauts to the moon, while the Aries 5, which will be the largest rocket ever built, will take their cargo.

Although the Moon base is still far off, various outpost models are currently being tested. NASA has already had a year-long test of an inflatable habitat in Antarctica.

Once NASA has mastered the art of off-planet survival, preparations for a Mars mission will be underway—although a time has not yet been set for that mission.

“It’s a long way off, but still NASA is taking a step back and looking at what we’d have to do,” Madison said. “We have a group of people looking at how to set up outposts and how to recycle air and water.”

The International Space Station currently has a water recovery system.

It takes three days to get to the moon. It takes six months to get to Mars. The outlook on the Mars mission includes an 18-month-long stay on the planet, making for an epic, two-and-a-half year-long journey when the ride home is included.

The NASA Hubble Space Telescope will get a makeover starting next week when the Atlantis space shuttle makes its fifth and final service visit to the telescope.

Preparations for the launch are in their final stages. A meter on NASA’s Web site counts the seconds left until the afternoon of May 11, when Atlantis and its crew of five will launch into space for its 11-day mission. The shuttle waits on the launchpad at NASA's Kennedy Space Center in Florida. Another shuttle sits on a nearby launchpad, on standby in the case an emergency space rescue is needed.

According to a NASA report, on the third day of flight, the Atlantis will be brought within 35 feet of the Hubble telescope. It will then use its robotic arm to stretch to the telescope and grab onto its grapple fixture. It will then reel in the Hubble, placing it carefully atop the shuttle's Flight Support System (FSS).

From there, the FSS can rotate and tilt the telescope to provide easy access for the crew.

The Atlantis' crew of six will begin their work on Hubble on the third day in flight. Aside from several parts replacements, Hubble will be fitted with new technology that will make it more powerful than ever.

One of the new installations will be a Cosmic Origins Spectrograph, which will enable it to observe how light put out by extremely faint quasars change as they pass through gasses in the galaxy.

“That helps the scientists learn what the gas is made of, how it changes over time, and how it affects the galaxies around it,” said Brandy Dean,

“We have eight or possibly nine missions left to go before the space shuttle fleet is officially retired.” Dean continued, “All countdowns for each mission are special right now.”

Another anticipated addition to the Hubble telescope will be the close to 900-pound Wide Field Camera 3. “That allows the telescope to take large-scale, extremely clear and detailed pictures over a wide range of colors,” Dean said, adding that the new camera enables it to photograph ultraviolet and infrared wavelengths.

The public can look forward to seeing pictures of space on NASA's Web site like never before.

In the case of an emergency with the Atlantis, NASA has prepared a second shuttle, the Endeavor, on a nearby launchpad. The Endeavor has a detailed rescue plan, which could evacuate the crew of the Atlantis and bring them safely home within eight days.

This is the first time since July 2001 that two shuttles have simultaneously occupied both launching pads.

The detailed plan outlines the evacuation of all crew members to the Endeavor, which would then begin the journey home.

Despite the precautions, Dean said that NASA is not expecting a need to use it. “They wouldn't go up there if they didn't think it was safe,” she said.