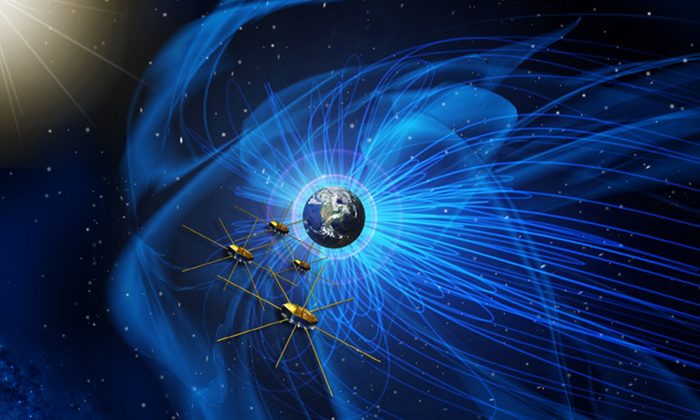 There’s a lot we don’t know about many of the magnetic effects we see throughout the universe. The familiar, beautiful northern lights, for example, are actually a bit of an enigma. They are driven by a mysterious magnetic process in which a huge amount of energy is explosively released when particles from the sun hit the Earth’s magnetosphere. This is so powerful it can even break down the Earth’s magnetic shield that normally protects us from harmful, charged particles.

Exactly how this fundamental process works has long been a puzzle to physicists. Now a new study published in Science has finally made a breakthrough by analyzing data from a NASA mission flying through a region of space where these explosions occur. The findings boost our understanding of phenomena ranging from faraway astrophysical events to local space weather and nuclear fusion.

Plasmas, known as the “fourth state of matter,” are composed of electrically charged particles—loose electrons (negatively charged) and atoms that have lost electrons (positively charged), which have no overall charge. You may not be as familiar with plasmas in your everyday life as you are with solids, liquids and gases, but they are by far the most common form of ordinary matter in the universe, making up 99.9 percent of it. They are a bit like a hot gas and can indeed be created by heating a gas or subjecting it to a strong electromagnetic field.

Plasmas are used in fluorescent lamps, supersonic combustion engines, plasma TV and during the production of electronics. And although they have plenty of further technological potential, there are still some unknown properties of the plasma state that we need to figure out before we can get any further, such as in harnessing new energy sources or safeguarding our technological infrastructure.

One of these is a process called “magnetic reconnection,” which can occur when plasmas with different magnetic fields collide. As the magnetic fields of each plasma get close to each other, the entire pattern of magnetic field lines changes and everything realigns into a new magnetic configuration—releasing huge amounts of energy.

Two plasmas (with magnetic fields colored blue and red) move towards one another where they meet and they reconnect, changing their magnetic field lines. (ChamouJacoN)

This process fuels the northern lights and many space weather events, from solar flares and coronal mass ejections to the geomagnetic storms they can cause on Earth. These events influence our technological systems (both in space and on the ground) and can endanger property and human health. The huge power unleashed in this process is also one of the reasons why you probably shouldn’t try to make a real-life lightsaber and take part in a duel with it.

Physics on a Tiny Scale

Over very large scales, plasmas can be treated as fluids which can conduct electricity. This is true even of very weak plasmas, like those in space, where we have only a few charged particles within the size of a sugar cube. By comparison the same volume of the air you breathe contains 27 quintillion (or 27 followed by 18 zeros) molecules.

But our theories of this large-scale behavior can’t quite explain reconnection. For that, we need to look at the physics happening at the small scale of particles. This becomes a very a complicated problem, even with our most advanced computing facilities. Nevertheless, we have been able to make some predictions about what we think happens within reconnection—namely that the entire process is in fact controlled by electrons within a very small region of space, the heart of the reconnection site as it were. But the true test is to observe what actually occurs in nature.

NASA’s Magnetospheric Multiscale Mission is a set of four identical satellites separated by only 10km and flying in a pyramid formation with advanced instruments on board. This configuration, designed to fly through magnetic reconnection sites, allows us to probe the physics of the electrons in the process. The study found that this mission flew through the very heart of a reconnection site on the edge of Earth’s magnetic shield, allowing the researchers to observe exactly how the energy from the magnetic fields is converted to energy of the particles in the plasma. This is the first mission to directly observe how reconnection happens, which is impressive as researchers have tried to do this for half a century.

Some of our previous theoretical predictions were confirmed with this finding, including that electrons drive the reconnection process, however a number of surprises were also found. The acceleration and amount of energy given to the electrons was greater than expected.

Since the process is fundamental to all plasmas, this is a major milestone for physicists working in many different areas. For example, it could in the future improve our ability to predict when and where space weather may affect us. Understanding when magnetic reconnection can occur and how it happens is key to making such forecasts.

We will also be able to apply this knowledge universally to environments far from Earth out in our plasma universe or indeed much closer to home—particularly to within nuclear fusion reactors. Such reactors, which enable atomic nuclei (atoms that have no electrons) in a hot plasma to collide to form a new nucleus while releasing energy in the same way as the sun. Reconnection can disturb the strong magnetic fields we use to keep this extremely hot plasma at bay.

So while flying spacecraft into an explosion in space may sound like the plot of a terrible science fiction movie or the scheme of a nefarious super villain, it is an incredibly exciting feat for plasma physicists that may allow us to jump the technological hurdles we currently face.

Martin Archer, Space Plasma Physicist, Queen Mary University of London in the U.K. This article was originally published on The Conversation.