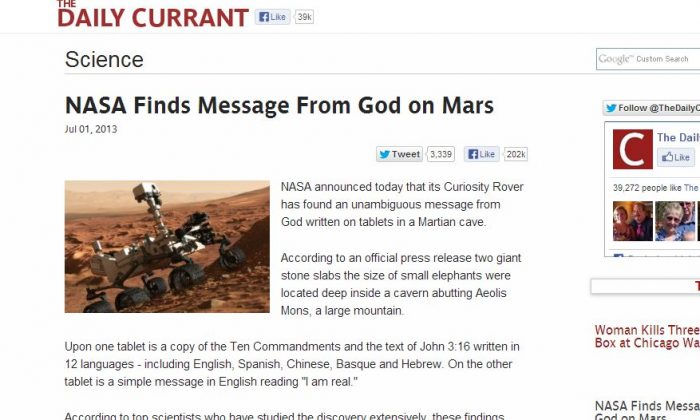 A screenshot of the Daily Current website shows the satire article.
Social Media

‘NASA Finds Message From God on Mars’ Article is a Hoax

An article that has gone viral titled “NASA Finds Message From God on Mars” is a hoax published on a satire website.

“According to an official press release two giant stone slabs the size of small elephants were located deep inside a cavern abutting Aeolis Mons, a large mountain,” reads the article, which says there’s an “unambiguous message from God written on tablets in a Martian cave.”

It adds: “Upon one tablet is a copy of the Ten Commandments and the text of John 3:16 written in 12 languages – including English, Spanish, Chinese, Basque and Hebrew. On the other tablet is a simple message in English reading ‘I am real.’”

The article was originally published on the Daily Currant, a self-proclaimed satire news website similar to The Onion.

In it’s “about” section, it says: “The Daily Currant is an English language online satirical newspaper that covers global politics, business, technology, entertainment, science, health and media. It is accessible from over 190 countries worldwide – now including South Sudan.”

There’s even a FAQ, which asks “are your news stories real?” In response, it says that “no. Our stories are purely fictional. However they are meant to address real-world issues through satire and often refer and link to real events happening in the world.”

More than 200,000 people shared the satire Mars story, which was published in July, but has recently generated significant social media traffic.