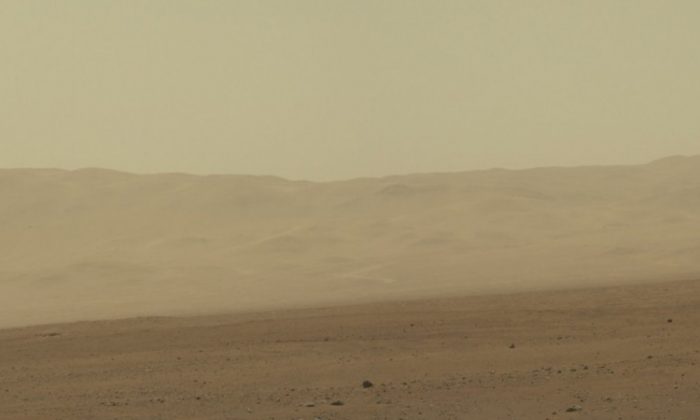 A color image from NASA's Curiosity rover's Mast Camera shows part of the wall of Gale Crater, the location on Mars where the rover landed August 5, 2012. (Credit: NASA/JPL-Caltech/MSSS)
Science

Mars Curiosity Rover analyzed a rock sample dug out from the Gale Crater and found key chemical ingredients that could have once supported living microbes on the red planet, according to a report released by NASA.

“A fundamental question for this mission is whether Mars could have supported a habitable environment,” said Michael Meyer, lead scientist for NASA’s Mars Exploration Program at the agency’s headquarters in Washington. “From what we know now, the answer is yes.”

The Rover has been exploring in an area called Yellowknife Bay where the scientists believe was the end of an ancient network of rivers or an old lake bed existent in the planet’s history. Curiosity, with ten science instruments, sent the data back to NASA after analysis. The chemicals found on the rock include sulfur, nitrogen, hydrogen, oxygen, phosphorus, and carbon, the basic building blocks of life. The sample was 20 percent clay and contained water-rounded stones.

“We have found a habitable environment that is so benign and supportive of life that probably — if this water was around and you had been on the planet, you would have been able to drink it,” said Curiosity chief scientist John Grotzinger, of Caltech in Pasadena.

“We have characterized a very ancient, but strangely new ‘gray Mars’ where conditions once were favorable for life,” said Grotzinger. “Curiosity is on a mission of discovery and exploration, and as a team we feel there are many more exciting discoveries ahead of us in the months and years to come.”

“It’s a remarkable achievement. We are starting to see results from MSL (Mars Science Laboratory) that already justify the mission,” said John Bridges, a planetary scientist and member of the Mars Curiosity team at Leicester University. “We’ll take it one sol at a time.” A sol is a day on Mars, equal to 1.027 Earth days.

Curiosity, costing $1.4bn, landed seven months ago to begin its two-year or one Martian year (687 days) mission. It’s main destination is a set of interesting deposits at the base of Mount Sharp, which rises 3 miles (5 kilometers) from Gale’s Center.

Europe and Russia have signed a deal last Thursday for a joint Mars mission, to explore and dig the surface of Mars deeper than the Curiosity Rover. According to a Reuters report, their plan for the ExoMars Rover includes bringing the samples back to Earth for detailed analysis.