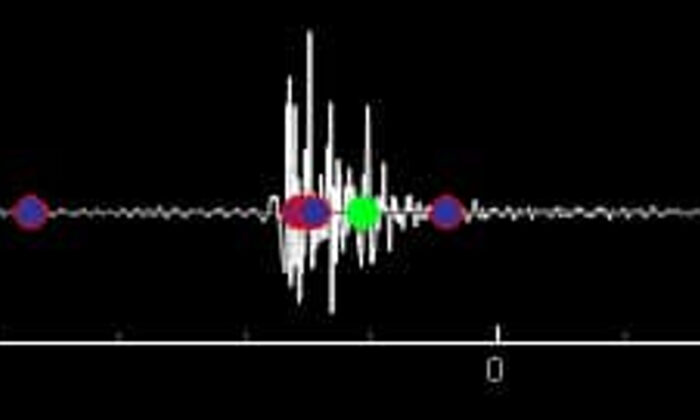 The blast wave from a meteor that caused an earthshaking boom over suburban Pittsburgh on Jan. 1, 2022. (NASA Meteor Watch)
Science News

PITTSBURGH—A meteor that caused an earthshaking boom over suburban Pittsburgh on New Year’s Day exploded in the atmosphere with an energy blast equivalent to an estimated 30 tons (27,216 kilograms) of TNT, officials said.

NASA’s Meteor Watch social media site said late Sunday a “reasonable assumption” of the speed of the meteor at about 45,000 mph (72,420 kph) would allow a “ballpark” estimate of its size as about a yard in diameter with a mass close to half a ton (454 kilograms).

If not for the cloudy weather, NASA said, it would have been easily visible in the daytime sky—maybe about 100 times the brightness of the full moon.

A nearby infrasound station registered the blast wave from the meteor as it broke apart, enabling the estimates.

National Weather Service meteorologist Shannon Hefferan told the Tribune-Review that satellite data recorded a flash over Washington County shortly before 11:30 a.m. Saturday and officials believed it was due to a meteor “falling through the atmosphere.” Hefferan said a similar event occurred on Sept. 17 in Hardy County, West Virginia.

Residents in South Hills and other areas reported hearing a loud noise and feeling their homes shaking and rattling. Allegheny County officials said they had confirmed that there was no seismic activity and no thunder and lightning.