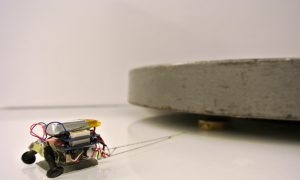 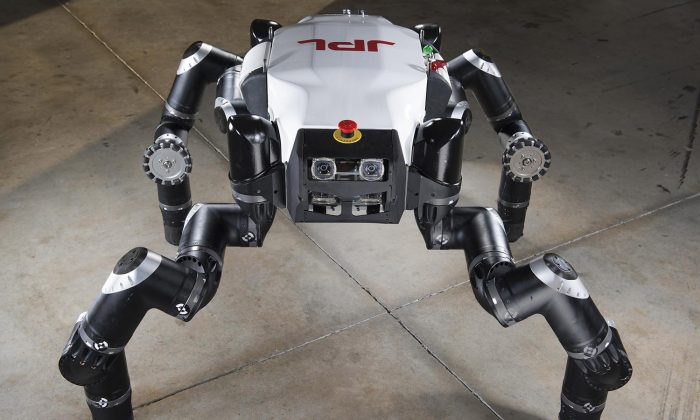 The RoboSimian was designed to do rescue mission work that are too dangerous for humans to perform. (JPL-Caltech)
Science

Starting June 5, Defense Advanced Research Projects Agency (DARPA) will host a two-day robotics contest in which 25 teams from all over the world square off over $3.5 million in cash prizes, including $2 million for first place.

The contest is meant to draw inventors to come up with robots that can go into disaster-stricken area that are too dangerous for humans, such as the Fukushima nuclear reactors, and perform search, rescue, and cleanup tasks.

In a simulation obstacle course, the robots will have one hour to complete a mock rescue mission, where they have to drive a car, cut holes in walls, operate a valve, and perform a “secret manipulation” task to be revealed on the day of the competition.

NASA’s Jet Propulsion Lab, which has extensive experience in building exploratory rovers, rose to the challenge, constructing the ape-like RoboSimian for the contest.

The RoboSimian is a force to be reckoned with, armed with four limbs that each have seven joints, each having as much torque as a Ford F-150 truck.

To “see” its surrounding, the RoboSimian uses seven stereo cameras as well as a LIDAR device, the same technology used by self-driving cars, to create a 3D map. Unlike autonomous cars however, the RoboSimian still needs to be piloted remotely by a human.

The RoboSimian, at 240 pounds, represents one direction of innovation in the field of rescue robotics, which aims to create bulky devices that can perform rescue missions by virtue of their invulnerability to elements in nature, be it radiation or the scalding heat.

At the other end of the size-scale are miniature robots that can crawl into spaces that are too small for humans to navigate. Researchers at Stanford have created beetle-like robots that weigh only 12-grams can pull objects thousands of times their own weight.