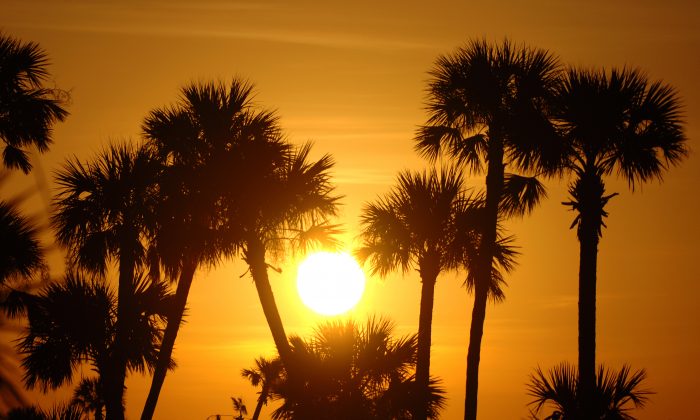 Palm trees and a setting sun on the horizon at the end of the Golden Eagle Pro Am at the 2006 Honda Classic at the Country Club at Mirasol in Palm Beach Gardens, Florida on Wednesday, March 8, 2006. (Al Messerschmidt/PGA)
Science

The past year was the hottest year on record, according to the National Oceanic and Atmospheric Administration (NOAA) and NASA.

The recording of annual temperature began in 1880, which mean that this is at least the hottest year in 136 years. The data was collected from 6,300 weather stations across the world, including ship-based ones at sea, and Antarctic research stations.

The competition for hottest year has been stiff in the past decade and a half. Fifteen of the 16 hottest years on record occurred between 2001 and 2015, but 2015 was still a standout. It surpassed the previous record (2014) by 0.29°F, marking the fourth time a global temperature record has been shattered in the new century.

“[The year] 2015 was remarkable even in the context of the ongoing El Niño,” Gavin Schmidt, a director at NASA, said in a statement. “Last year’s temperatures had an assist from El Niño, but it is the cumulative effect of the long-term trend that has resulted in the record warming that we are seeing.”

During 2015, the average surface temperature was a full 2.39°F above the 20th century average, and the warmth was spread around the world, including the northern half of South America, and northern, southern, and eastern Europe, as well as eastern and southern Africa.

In the continental United States, and annual temperature was the second hottest on record.

Of course the NASA, NOAA records are not without their dissenters. A widely shared opinion article published in the Telegraph last year by Christopher Booker raised the idea—which is not his alone—that global warming numbers are cooked:

“When future generations look back on the global-warming scare of the past 30 years, nothing will shock them more than the extent to which the official temperature records—on which the entire panic ultimately rested—were systematically ‘adjusted’ to show the Earth as having warmed much more than the actual data justified.”

Needless to say, the view is a highly controversial one.