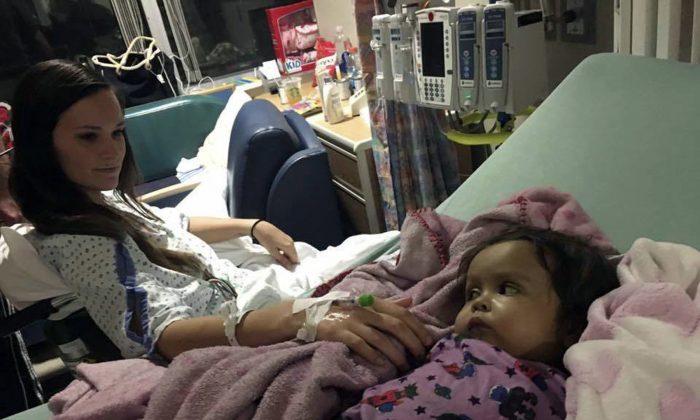 Kiersten Miles (L) greets Talia Rosko after a surgery Jan. 14, 2017, at Children's Hospital of Philadelphia where Miles donated a portion of her liver to the girl. (Farra Rosko via AP)
US

JACKSON, N.J.—A 16-month-old New Jersey girl’s life has been saved by her nanny, a University of Pennsylvania student who donated a portion of her liver to aid the child.

Kiersten Miles had only known the Rosko family, of Jackson, for three weeks when she learned that baby Talia had a serious disease that could turn fatal if she didn’t receive a liver transplant.

The family’s medical team informed Miles of the ramifications the procedure could have not only on Talia but also herself.

“I can never donate again,” she said, even if she is a perfect match.

Undeterred, Miles donated part of her liver at the Hospital of the University of Pennsylvania in early January after she was determined to be a match with Talia.

“It’s such a small sacrifice when you compare it to saving a life,” Miles said. “Some of her doctors said she possibly wouldn’t have made it past 2 years old. All I had to do was be in the hospital for a week and a 5-inch scar.”

Doctors have said both Miles and Talia are recovering nicely.

“I didn’t know that she was this selfless ) I’ve come to find out that this is who she is,” Talia’s mother Farra Rosko said of Miles. “She really is an angel on earth; I know that sounds silly, but she really is.”