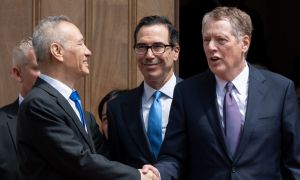 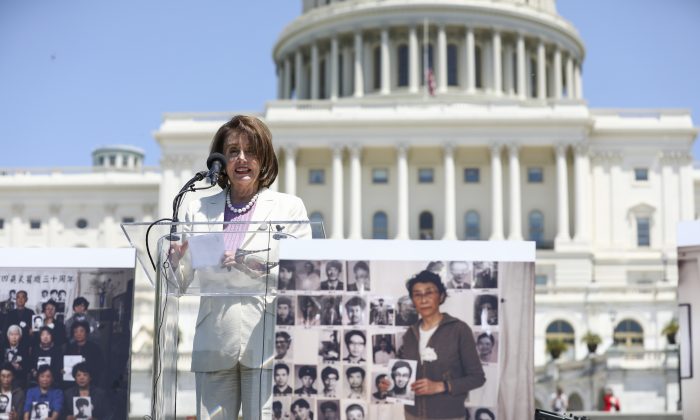 In the week marking 30 years since the Tiananmen Square massacre in China, House Speaker Nancy Pelosi urged the U.S. government to link human rights to current trade negotiations with the Chinese regime.

She further indicated that the Trump administration has raised concerns about human rights during bilateral talks with Beijing.

When asked by a Voice of America reporter on June 4 about whether she would like to see President Donald Trump include human rights and democracy issues into trade talks with the Chinese regime, Pelosi responded: “Yes. And he says that he has, so we’ll see.”

The two countries are currently locked in a trade war, which took a downward turn in early May after the U.S. administration accused the regime of backtracking on commitments negotiated over months of discussions, prompting the United States to raise tariffs on $200 billion of Chinese goods. The regime then imposed a retaliatory tariff hike on $60 billion of U.S. imports.

28 years ago, we traveled to Tiananmen Square to honor the courage & sacrifice of the students, workers & ordinary citizens who stood for the dignity & human rights that all people deserve. To this day, we remain committed to sharing their story with the world. #Tiananmen30 pic.twitter.com/7UqiJVRS3t

At a congressional hearing on June 4 commemorating the 30th anniversary of the Tiananmen Square massacre, Pelosi said that human rights and trade cannot be separated.

“That’s why in 1993, we worked on the US-China Act to tie any extension to China’s trade status to improvement of human rights by the Chinese government. In 1994, we urged Congress to limit the Most Favorable Nation status on products made by the People’s Liberation Army, the perpetrator of the massacre on Tiananmen Square.”

The congresswoman, who had opposed the 2000 bill normalizing trade relations between the two countries—which eventually passed—said the United States’ backing of China’s ascension to the World Trade Organization (WTO) in 2001 was a mistake.

“The US-China bilateral WTO agreement is seriously deficient in substance, implementation, and enforcement. This issue is too important for our economy to be based on a pattern of broken promises and not proven performance.”

“We cannot allow economic interests in China to blind us to the moral injustices committed by China,” she added.

The Trump administration last year said the United States had mistakenly supported the regime’s membership into the WTO, on terms that failed to prompt Beijing to open up its economy.

“It seems clear that the United States erred in supporting China’s entry into the WTO on terms that have proven to be ineffective in securing China’s embrace of an open, market-orientated trade regime,” the U.S. Trade Representative said in a 2017 annual report to Congress on China’s compliance with WTO commitments released in January 2018.

“It is now clear that the WTO rules are not sufficient to constrain China’s market-distorting behavior,” the report said.