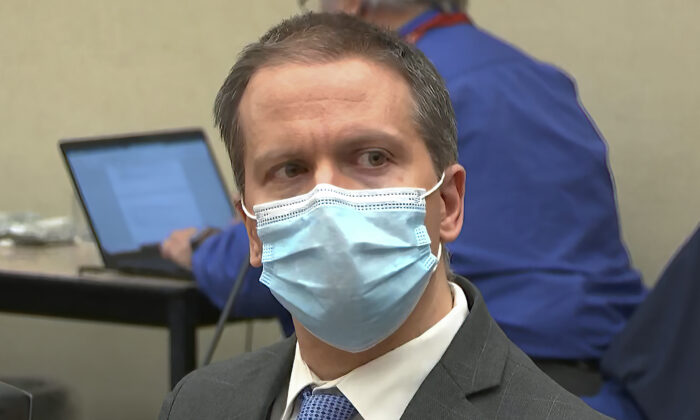 In this image from video, former Minneapolis police officer Derek Chauvin listens as the verdict is read in his trial for the 2020 death of George Floyd, at the Hennepin County Courthouse in Minneapolis, Minn., on April 20, 2021. (Court TV via AP/Pool)
Judiciary

Names of Jurors Who Convicted Derek Chauvin to Be Released Nov. 1

The names of at least 14 jurors and alternatives in the jury that convicted former Minneapolis police officer Derek Chauvin in the murder of George Floyd will be released Nov. 1, according to an order on Monday from the judge who led the high profile case.

Hennepin County Judge Peter Cahill shared the information in a statement, revealing that the written questionnaires of the 109 potential jurors, along with the verdict, will be released on Monday.

“On the present record, this Court cannot assay any strong reason to believe the jurors continue to need protection from any external threats to their safety at this point, four months after this Court’s sentencing of Chauvin, or that there is a substantial likelihood that making the prospective and impaneled jurors’ names public information will interfere with the fair and impartial administration of justice,” Cahill wrote Monday (pdf).

Two of the jurors and one alternate have already made their identities public.

“[T]wo of the jurors and one of the alternates chose to go public about their service on the jury,” the statement added.

“None of those jurors has communicated to this Court that they have been harassed or have endured any threats to their personal safety,” Cahill added.

The judge later wrote, “There is simply no objective evidence from which this Court can conclude there is any present strong reason to believe that making the Chauvin jurors’ names and juror questionnaires public information at this time, six months after the jury returned its verdicts, presents any external threats to the jurors’ safety.”

The questionnaire and some information about the jurors have already been made public. For example, all of the jurors lived in Hennepin County. Of the 12 jurors, five were men and seven were women.

In addition, court information noted six jurors were white, four were black and two were multiracial. Two alternates were both listed as white women.

The identities of the jurors were kept from the public record earlier as a safety precaution due to the sensitivity surrounding the case. The decision to now release the names of the jurors has been received as somewhat of a surprise, as many believed the identities would never be revealed.

Chauvin was convicted on all three counts against him in May regarding the death of George Floyd. The convictions included second-degree unintentional murder, third-degree murder, and manslaughter.

Sentencing was announced on June 25, with Chauvin receiving 270 months, or 22.5 years, in prison.

Last month, Chauvin announced plans to appeal the sentence against him. Earlier this month, his appeal for a public defender was shot down by the state.