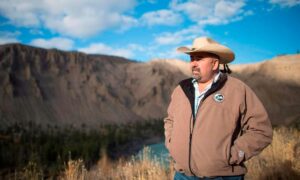 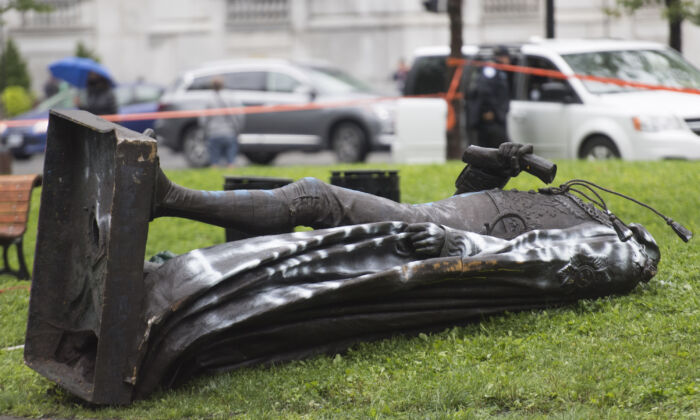 A headless statue of Sir John A. Macdonald lies on the ground after being torn down in Montreal on Aug. 29, 2020. (Graham Hughes/The Canadian Press)
Canada

Name Change in the Works for Sir John A. Macdonald High School in Nova Scotia

The principal of Sir John A. Macdonald High School in Upper Tantallon, Nova Scotia, says the school will be renamed to reflect inclusivity, especially regarding indigenous students.

In an open letter, principal Darlene Fitzgerald invited students, parents, and faculty members to provide ideas for a new school name, saying the current name “alienates Indigenous students,” noting Macdonald’s involvement in the establishment of the residential school system and the passage of the Indian Act of 1867.

Suggested names will be collected from Nov. 12 to Nov. 26 and will then be vetted by a four-member subcommittee of the School Advisory Council before a new name is decided on.

In Ontario, there has been a campaign to have Macdonald’s name removed from public schools since August 2017,  when the Elementary Teachers’ Federation of Ontario adopted a resolution urging school boards to consider removing his from the province’s schools.

In October of this year, Queen’s University removed Macdonald’s name from its law school building.

Statues of Canada’s first prime minister have also been a focal point of protest in various parts of the country, with statues vandalized or torn down.

In August, a statue of Macdonald in downtown Montreal was torn off its pedestal by an activist group known as the Coalition for BIPOC Liberation. BIPOC stands for black, indigenous, and people of colour.

“Many of those on the extreme left responsible for this kind of violence claim that Canada is an illegitimate state, all the while enjoying Canada’s rights, freedoms, privileges & prosperity. None of those things were created by accident,” Kenney wrote on Twitter.

“It’s right to debate [Macdonald’s] legacy and life. But it is wrong to allow roving bands of thugs to vandalize our history with impunity.”

Conservative Party Leader Erin O’Toole called on politicians not to sit by while attempts are made to deface Canada’s history.

“Canada wouldn’t exist without Sir John A. Macdonald,” O’Toole tweeted. “We will not build a better future by defacing our past. It’s time politicians grow a backbone and stand up for our country.”

“We must fight racism, but destroying parts of our history is not the solution,” Legault tweeted. “Vandalism has no place in our democracy and the statue must be restored.”

A survey by Leger and the Association For Canadian Studies conducted in September found that more than half of the 1,529 Canadians polled oppose “removing statues/monuments from public spaces of politicians who have demonstrably harboured racist views or implemented racist policies.”

Seventy-five percent of respondents were against the “spontaneous” tearing down of Macdonald’s statue while just 11 percent said they were in favour.

A statue of Macdonald sitting on a bench in downtown Charlottetown, Prince Edward Island, had red paint splashed over it in June, and in September the bench was knocked over and dragged.

In 2018, a statue of Macdonald was taken down from in front of city hall in Victoria, B.C., after councillors voted to remove it as a gesture of reconciliation.

An Angus Reid survey at the time found that 55 percent were opposed to the removal of the statue, compared to 25 percent in favour, and fully 70 percent said the name and image of Macdonald should remain in public view.