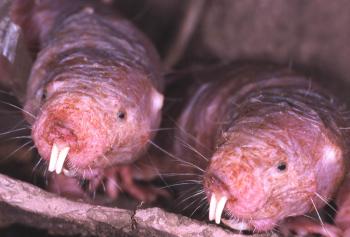 Despite their small body size, naked mole rats can live up to 30 years because they never contract cancer. (Courtesy of Kenneth Catania)
Science

Naked Mole Rats Could Hold Key to Being Cancer-Free

By Helena Zhu
Print
Naked mole rats (Heterocephalus glaber) may never win beauty contests, but they hold the secret to staying cancer-free in their 30-year lifespan.

Over the last three years, biologists at the University of Rochester have worked to understand cancer from a curious angle—investigating rodents from across the globe to observe how they deal with cancer.

Cancer is the primary cause of death for rodents such as mice and rats. Mice live about three years in captivity and a year in the wild, according to University of Rochester professor Vera Gorbunova, yet naked mole rats can manage to survive for up to 30 years.

“Naked mole rat is a very unusual animal. They are extremely long-lived for such a small size,” said Gorbunova.

“Usually, large animals like whales are long-lived, but the naked mole rat does not follow this rule at all. They are about mouse-size, yet they live so long. They need such cancer resistance to live for so long to protect their mechanism.”

Gorbunova believes that she and her colleagues have found the primary reason these small, native African animals are staying cancer-free. When they tried to culture mole rat cells in the lab, the cells stopped replicating once a number of them occupied a certain amount of space. Other cells, such as human cells, also cease replication when their populations become too dense, but mole rats' cells were reaching their limit much earlier than the cells of other animals.

"Since cancer is basically a runaway cell replication, we realized that whatever was doing this was probably the same thing that prevented cancer from ever getting started in mole rats," said Gorbunova.

Like humans, mole rats have a gene called p27 that prevents cellular overcrowding, but cancer cells tend to find ways around this. In mole rats, however, the p16 gene provides another barrier that a cell must overcome before it can grow uncontrollably.

"We believe the additional layer of protection conferred by this two-tiered contact inhibition contributes to the remarkable tumor resistance of the naked mole rat," said Gorbunova in her research paper.

Gorbunova and her team are now planning to explore deeper into mole rats' genetics to see if their cancer resistance might be applicable to humans.

Naked mole rats’ oddities can be credited to their living environment. Spending virtually their entire lives in underground communities in Africa, these nearly hairless creatures must continually dig tunnels in search of sporadic food supplies. In this harsh environment, naked mole rats have been breaking many mammalian rules, including having an oddly insect-like social system known as eusociality.

Their community consists of a queen, a few males that mate with her, and a large number of mole rats that live in celibacy—workers, soldiers, and nannies. To produce a maximum number of offspring, the queen mates immediately after giving birth. The litter size starts at about three to five and gradually increases to about 17.

“Every female in the colony can potentially become reproductive, yet the queen intimidates other females from reproducing. However, if she dies, females will fight to death to become the queen,” said Gorbunova.

This research was funded by the National Institutes of Health and the Ellison Medical Foundation.