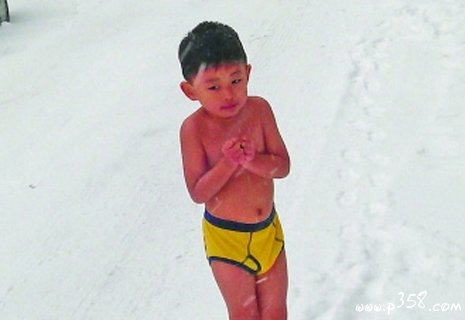 A four-year-old boy from Nanjing, China, vacationing with is parents in the U.S., was ordered by his "eagle" father to run in the snow in his underwear. This was to welcome the Chinese New Year and also to make the boy tough and strong. Flushing, NY, Jan. 22, 2012. (Weibo.com)
China

A Chinese man from Nanjing, on vacation in New York, made his four-year-old son welcome the Chinese New Year by running and doing push-ups during a blizzard, wearing only underwear.

The video shows a little boy in the snow, wearing nothing but underpants and sneakers. Shivering and purple, the child is doing push-ups and runs around in the street for five minutes with his parents coaxing him on.

The video was shot in Flushing, New York, on the morning of Jan. 22, the day before the Chinese New Year, when the temperature was 8.6 degrees Fahrenheit. It was uploaded on the Chinese Internet site zthzrb.hangzhou a few days later and has sparked much discussion among Chinese.

Little He Yide just turned four and has already started first grade at Nanjing YuShuiwan primary school on Feb. 7, according to a report by Modern Express.

The boy’s father, 43-year-old He Liesheng, is an entrepreneur from central China’s Nanjng City. He is referred to as an “eagle dad.” Yide was a premature baby with many health challenges after birth. Anxious over his physical development, the father resorted to draconian measures to toughen the boy up.

Many anxiety driven Chinese parents inflict such cruelty on their children, following a type of pop-psychology that subscribes to “survival of the fittest” laws and behaviors observed in the animal kingdom.

Eagles build a nest high on a cliff. When the chick grows wings, the eagle mother pushes it out of the nest. In a desperate attempt to save itself, the little eagle flaps its wings and learns to fly.

There is also “wolf”-style parenting, which advocates flogging to intimidate the child, and “tiger mothers,” who push their offspring aggressively to hunt for success.

Mainland Chinese merchant Xiao Baiyou was known to beat his children with a stick whenever they misbehaved. Out of his four children, three were admitted to Peking University. He has been nicknamed “China’s wolf dad” by Chinese media.

Amy Chua, a law professor at Yale University, became famous in the U.S. for her book Battle Hymn of the Tiger Mother, in which she describes her efforts of giving her children a strict “Chinese” upbringing, earning her the title “tiger mom.”

The video of little He Yide shivering in the snow has elicited strong reactions from the Chinese public, with 260,000 people viewing it within a few days. Many netizens were distressed and concerned that there would be psychological repercussions from such harsh treatment. But there were also some who expressed their support for such child training methods.

According to a poll on Weibo.com, China’s most popular microblog, 61 percent of respondents said they are against the eagle-style parenting, 27 percent were neutral, and 12 percent felt that this type of education has some merit.

Responding to questions from The Epoch Times, Ms. Sun, a teacher from Harbin, said such harshness in education is not recommended by schools. She said while she believes that strict discipline is good for a child’s growth and development, when it exceeds certain limits, it becomes inhumane. On the other hand, due to the one-child policy in China, parents nowadays spoil their child, harming his development, Sun said.

Mr. Wang, a retired teacher from Beijing, told The Epoch Times, there is a Chinese saying, “A dutiful son comes out of beatings with a stick.”

Wang drew an example from history. He said Emperor Kangxi of the Qing Dynasty (1661 – 1722) was very strict with his children and grandchildren. His son, Emperor Yongzheng, and his grandson, Emperor Qianlong, when they were children, had to rise at four in the morning to memorize books.

“Such discipline is no longer seen now. Today’s parents won’t let their child suffer at all. In fact, a certain amount of suffering is very good for children’s development,” Wang said. “If children are trained well, they will not go astray,” he added.

Former Taiwan University Professor Chen Yanling told The Epoch Times, that the eagle dad is only concerned about his son’s intelligence, not his psychological health.

“I think this father’s extreme way of educating his child is a reflection of Chinese society and the education environment in recent years. In a society that upholds competition for survival, the law of the jungle, and the worship of wolfish nature, people only use [material] success to judge a person’s qualities,” Xia said.