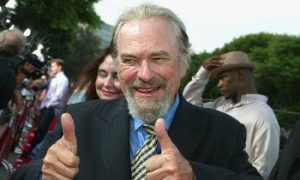 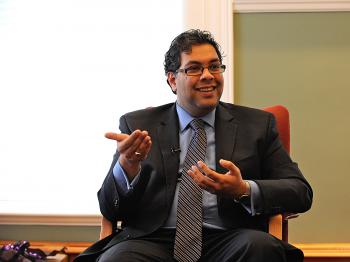 Calgary Mayor Naheed Nenshi says being mayor means asking himself whether his actions are guided by ego or the best interests of the city. (Jerry Wu/The Epoch Times)
Canada

By Maple Lynn
biggersmaller
Print
Naheed Nenshi made history recently when he became the first Muslim mayor in Canada, winning his office in what most people think is one of the country’s most conservative cities—Calgary, Alberta. Nenshi sat down with The Epoch Times to talk about his family, the work to come, and what it means to be an immigrant son in the land of Canada.

Epoch Times: Many say your successful story is not only a tribute to Canada’s multi-cultural strategy, but also the integration of next-generation Canadians. What do you think?

Nenshi: One of the most interesting things about this election is how very little the issue of my being a first-generation Canadian or my faith or my skin colour had anything to do with it. Shortly after the election, suddenly the national and international media were very interested to know, ‘Hey, how does a Canadian city end up with a mayor who looks like this?’

The most interesting part of that for me was that, in fact, I had been in Calgary longer than either of my two rivals, because I grew up in this city. And much of what I am is much of what this city is. I grew up in East Calgary in a very working-class family. My parents immigrated here from East Africa just before I was born, and I never shied away from that.

Epoch Times: Many first generation immigrants are challenged to overcome characteristics that make it hard to join mainstream society.

Nenshi: This is an interesting issue, because the challenge we have when we look at communities that are multicultural … and pluralistic is that balance between becoming part of the mainstream or assimilation, on the one hand, and maintaining the strength and power of your own culture on the other hand. And it’s really easy to get yourself tied in knots about “What am I? Am I Muslim first or Canadian first, am I Indian first or Northeast Calgary first?”

To me these debates are not very helpful, because I believe that it’s possible to be all of these things. So one of my favourite things in the world is in my part of Calgary, when I go to T & T Supermarket—the Chinese supermarket—there’s probably about 50 percent of the people in there who are of Chinese origin and the other 50 percent are from everywhere, and I just love seeing mainstream Caucasian as well as Afro-Caribbean Canadians all shopping and trying to find the right noodles at T & T.

To me that really is an example of how as a society, as a community here in Calgary, we’ve gotten beyond these endless and unhelpful debates around assimilation or keeping your own culture and just gone, “Look, there’s great value in all of us, and we can figure out ways this value works.”

Epoch Times: Who did you respect when you went to school?