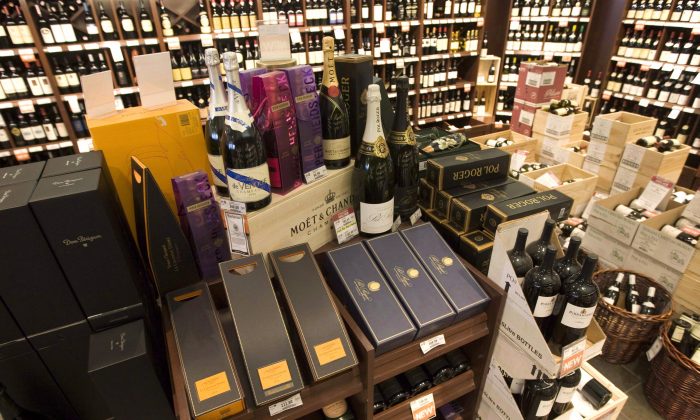 High-end wine and sparkling wine on display at a liquor store in Vancouver. (The Canadian Press/Jonathan Hayward)
Canada

NAFTA Talks: US Dispute Over Canadian Wine Sales Restrictions on the Table

OTTAWA—U.S. Trade Representative Robert Lighthizer has an issue with getting agricultural products to Canada, and it might not be the ones you think.

“It’s an extraordinary problem for those people who are affected, and there is no justification for it,” Lighthizer said June 22 when he appeared before the House of Representatives ways and means committee to talk about trade priorities.

Much of the spotlight on Canada-U.S. trade leading up to the new North American Free Trade talks has been on dairy products. This time, though, Lighthizer was not talking about cheese, but what you pair it with: wine.

Two days before President Donald Trump entered the White House, the United States launched an aggressive trade challenge by asking the World Trade Organization to examine how the B.C. government was allowing only wine produced within the province to be sold in grocery stores.

Lighthizer told the committee in June that WTO consultations—the first stage of the process—had not resolved things, so the administration was thinking about whether to press ahead with a dispute settlement panel in Geneva.

Then he mentioned another, perhaps friendlier, way to go: the new NAFTA. “In this case it would make more sense to negotiate and do it in a less hostile way,” he said.

A month later, Lighthizer published the list of goals the Trump administration has for a renegotiated trade deal with Canada and Mexico, in advance of the first round of talks on Aug. 16. Canadian wine got a mention in the accompanying news release.

I guess our concern is that with all the stuff on the table, wine isn’t used as a bargaining chip somehow.
— Miles Prodan, British Columbia Wine Institute

The move to allow only B.C. wines to be sold in B.C. grocery stores, which the United States argues is discriminatory, is not the only issue the Trump administration has with the way Canada imports and sells wine.

The U.S. government’s annual report on trade barriers highlights a complaint that would be shared by many Canadian consumers who have long chafed at limited access: in many parts of the country, province-run liquor control boards restrict the sale of wine, beer, and spirits.

Restrictions on listings, cost-of-service mark-ups, maximum or minimum price points, distribution policies, labelling requirements, and making suppliers discount their prices to meet sales targets were all mentioned as things getting in the way.

The report said the U.S. government is reviewing the situation in Ontario, where about 70 grocery stores are now allowed to sell both domestic and imported wine, under certain conditions that include country of origin.

It also suggested that a recent move to allow Quebec wine to be sold in Quebec grocery stores could give craft wineries an unfair advantage.

The fledging Canadian wine industry won some concessions in the 1987 Canada-U.S. Free Trade Agreement (CUSTFA), which meant they were allowed to grandfather in some protectionist measures to support domestic wines in exchange for opening up the Canadian market to more U.S. wines. Those protections were integrated into NAFTA.

Tom LaFaille, the vice-president and international trade counsel for the Wine Institute, an advocacy organization for the California wine industry, argued the Canadian wine industry is now big enough that it should not be able to get away with such supports.

“We just feel that it’s important to end those practices, some of which may have been imposed when Canadian wine was in its infancy,” said LaFaille.

Asha Hingorani, the director of government and public affairs for the Canadian Vintners Association, said the complaints coming from the United States, which has a $450 million wine trade surplus with Canada, should be put into perspective.

“Our industry generates $9 billion in economic impact to the Canadian economy and we produce 37,000 jobs, but compared to the size of the United States, it’s like a David vs. Goliath scenario,” she wrote.

Miles Prodan, president and CEO of the British Columbia Wine Institute, is worried that the small size of the Canadian wine industry could end up meaning Canadian products get lost in the shuffle.

“I guess our concern is that with all the stuff on the table, wine isn’t used as a bargaining chip somehow,” he said.