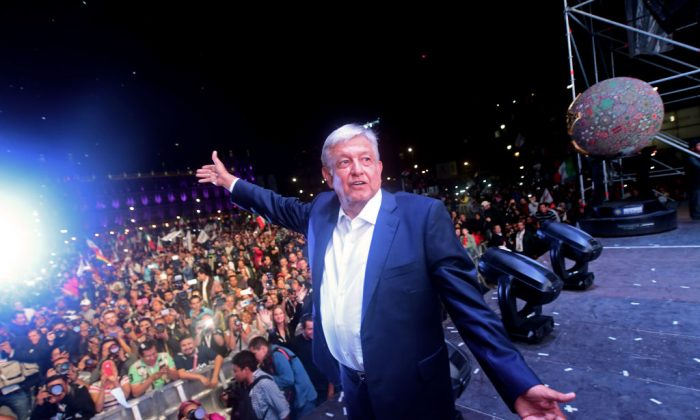 NAFTA Talks to Get More Complicated

Trump and Mexican president-elect strike conciliatory tones, but NAFTA deal will be hard to reach in near term, say experts
By Emel Akan

Mexico’s leftist president-elect Andrés Manuel López Obrador says he is willing to work with President Donald Trump and reach a deal on the North American Free Trade Agreement (NAFTA), despite strongly criticizing his American counterpart during the Mexican presidential election. Experts, however, cast doubt on the leader’s ability to strike a deal in the short term.

López Obrador was elected on July 1 in a landslide victory. Prior to his election, López Obrador was very critical of Trump, calling him “erratic and arrogant.” He even wrote a book titled “Listen Up, Trump!” in which he slammed Trump’s immigration policies.

He was also critical of Trump’s NAFTA demands and pledged he would change Mexico’s approach if an agreement wasn’t reached prior to his election.

Contrary to expectations, however, both Trump and López Obrador have tried to strike a more conciliatory tone after the election. Mexico’s new president-elect has even said he will support the current government’s approach to the NAFTA talks until his inauguration on Dec. 1.

“López Obrador isn’t likely to get into a fight with his American counterpart. He’s got too much to worry about back home,” Duncan Wood, head of the Mexico Institute at the Wilson Center in Washington, wrote in Politico on July 3. The president-elect would pursue stability in place of revolution, he said.

Following the election, the two leaders spoke for 30 minutes on the phone, in a call that Trump described as “a great conversation.”

“I think the relationship will be a very good one,” Trump told reporters after the call adding that they covered a number of topics including border security, NAFTA, and the possibility of a separate trade deal.

“For all the speculation about López Obrador becoming an antagonist of Trump, it is unlikely that he would risk further deterioration of the bilateral relationship,” Joel Martinez, a research associate at the Center for American Progress, wrote on Inside Sources, a news website.

“When reflecting on López Obrador’s tenure as mayor of Mexico City, he was less radical and more pragmatic than he recently appeared to be—there are many in Mexico and the United States that believe his recent posture and political rhetoric were for campaign purposes only and that he will ultimately be a rational leader.”

Despite a positive chemistry between Trump and López Obrador, a frosty relationship between Trump and Canadian Prime Minister Justin Trudeau has made things more complicated in renegotiating NAFTA, according to Stephen Moore, an economist at The Heritage Foundation and former economic adviser to Trump’s 2016 presidential campaign.

Moore is skeptical about whether the United States, Canada, and Mexico will be able to get a deal done in the next three to five months, before the U.S. mid-term elections.

“If the Democrats take over Congress, they will be more skeptical of giving Trump a victory on anything,” he told NTD, part of the Epoch Media Group.

“So time is of the essence, and there is a lot to be done between now and November to get this thing ratified.”

According to a Detroit News article, auto industry experts are doubtful that Mexico’s new president will reach a quick deal with Trump. His lengthy transition period is adding another complexity to the NAFTA talks that have already stretched well beyond the initial time frame of one-year.

Canadian, Mexican, and U.S. auto trade associations on July 9 issued a joint statement urging the leaders to return to the negotiating table “now” with a renewed focus and strike a “cohesive three-country” deal.

“It is in the best interest of all three countries to refocus on establishing a new NAFTA agreement that will allow the North American auto industry to remain globally competitive,” said the statement, released by the automotive industry associations representing vehicle and parts manufacturers from the three nations.

Ongoing NAFTA talks create uncertainty across many businesses, particularly in the automotive industry. Last year, over $99 billion of autos and autos parts were shipped from U.S. ports to more than 88 countries, according to the Alliance of Automobile Manufacturers. About 74 percent of U.S. motor vehicle parts are exported to Mexico and Canada.