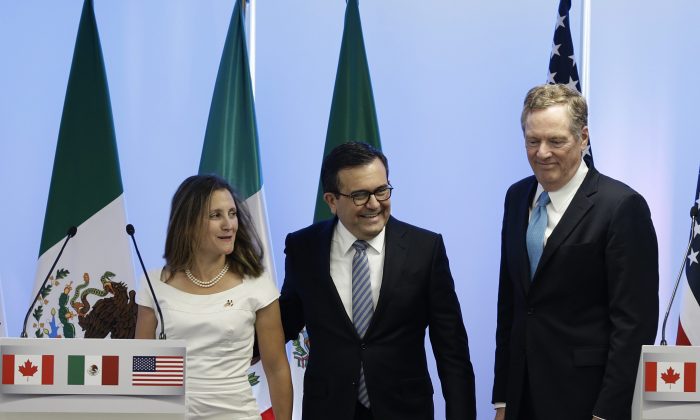 NAFTA: Negotiators Report Progress in Latest Round of Talks

Round 2 wraps up in Mexico City; Ottawa to host Round 3 later this month
By The Canadian Press

MEXICO CITY—The latest round of NAFTA negotiations have wrapped up with the three countries declaring they have made progress, and committing to work through the harder negotiating issues in time to get a deal by the end of the year.

The three lead ministers say they’re pleased with what’s been accomplished as the talks move to Ottawa for the next round, scheduled to run from Sept. 23-27.

While sources say there has been no serious movement yet on any of the more sensitive issues, the countries say they have tabled two dozen texts that will form the backbone of the chapters in a modernized North American Free Trade Agreement.

During the closing news conference on Aug. 1, Foreign Affairs Minister Chrystia Freeland repeatedly stressed that it’s normal for the major sticking points to remain unresolved at this point in the process.

The countries have started working through the easier issues, have tabled texts, and have had a chance to learn each other’s priorities, Freeland said.

The agreements reached so far relate to less-controversial parts of the trade deal.

U.S. trade czar Robert Lighthizer extended his thanks to both North American neighbours for their best wishes in the wake of a devastating hurricane in Texas and Louisiana.

Lighthizer said two dozen chapter texts have been tabled, and though he reiterated some of his tough talk from the opening round, where he lamented the devastation caused by NAFTA, he struck a less aggressive tone.

“Our work continues at a record pace,” he said.  “These chapters represent a new modern agreement which, once concluded, will support robust economic growth in North America for decades to come.”

The agreements reached so far relate to less-controversial parts of the trade deal.

Multiple sources say the countries have not even begun dealing with the more complex elements—and that any attempts by one party to raise a contentious issue have been brushed off by the other parties.

That’s true of Canadian proposals like some labour reforms, which have been declared a non-starter by the United States.

It’s also true of the U.S. desire to secure more dairy sales in Canada. The United States tried informally starting the conversation, and sources say Canada pushed it off.

Freeland said it’s normal to put off the hardest topics.

She said a negotiation starts by learning where other countries’ priorities are. She compared it to her former work as a journalist: The first step is gathering information, and the final step is using it to produce a finished product.

The countries were conducting that vital research phase during the five-day negotiating round in Mexico, she said.

“It’s about figuring out, ‘What are you trying to achieve? What are your objectives?'” she said.

The round played out under a cloud of uncertainty. Entering the negotiations, U.S. President Donald Trump threatened to withdraw from NAFTA.

But according to Lighthizer, that’s not the position he as trade czar wants to take. During a briefing session with reporters in which non-U.S. media were banned from attending, he was asked about his boss’s threats to terminate NAFTA. One account of the exchange, surfacing on Twitter, suggests Lighthizer refrained from echoing it.

“I’m not taking that position,” a reporter with Inside U.S. Trade quoted Lighthizer as saying. “I want a good agreement.”