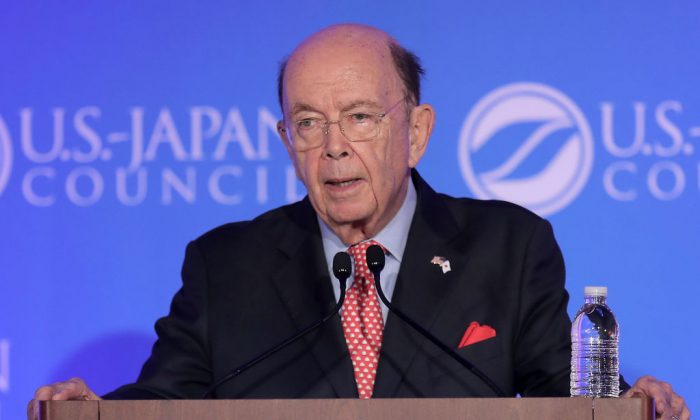 WASHINGTON—The North American Free Trade Agreement (NAFTA) talks are now addressing the more intricate details of the deal, and the political calendar will make it very challenging to complete a new agreement, according to Secretary of Commerce Wilbur Ross.

Speaking at the 2017 U.S.–Japan Council annual conference on Nov. 13, Ross said there is no exact date by which the negotiations must end. But if there is no resolution by the end of March, then it will become more difficult to finalize the talks, he said.

Ross cited the upcoming provincial elections in Canada and the presidential election in Mexico next year as impediments. He also reiterated that current Trade Promotion Authority (TPA) in the United States would expire in July 2018.

“Given the nature of the Congress right now, it is unclear whether that authority would be renewed,” he said.

If parties fail to reach a three-way deal, NAFTA is likely to fall apart.

TPA, also known as fast-track trade legislation, is a legislative procedure that the Congress grants to the president. It allows the administration to negotiate trade deals without interference that causes delays, such as filibusters.

“If we don’t have the so-called fast-track authority, it is very very difficult as a practical matter to get anything done,” Ross said.

He said another challenge will be the congressional mid-term elections in November next year.

“The further we get into 2018, the harder it will be to get anything complicated approved in Mexico, in Canada, or in the United States,” he said.

President Donald Trump has called the 23-year-old NAFTA “a disaster” and vowed to overhaul the terms.

Negotiations between Mexico, Canada, and the United States began in August, and the fifth round of talks will be held in Mexico City from Nov. 17 to 21. Under NAFTA rules, countries can unilaterally withdraw from the agreement by giving six months’ notice.

It will be devastating for the Mexican economy if an agreement can’t be reached, said Ross. Mexico sends nearly 80 percent of its exports to the United States.

In addition, both Mexico and Canada have trade surpluses with the United States, so “that would be far more damaging to them than to us,” Ross said at the Wall Street Journal’s CEO Council Meeting on Nov. 14.

“I would certainly prefer them to come to their senses and make a sensible deal.”

If parties fail to reach a three-way deal, NAFTA is likely to fall apart. Trump earlier indicated that he is open to bilateral trade agreements with both Canada and Mexico.