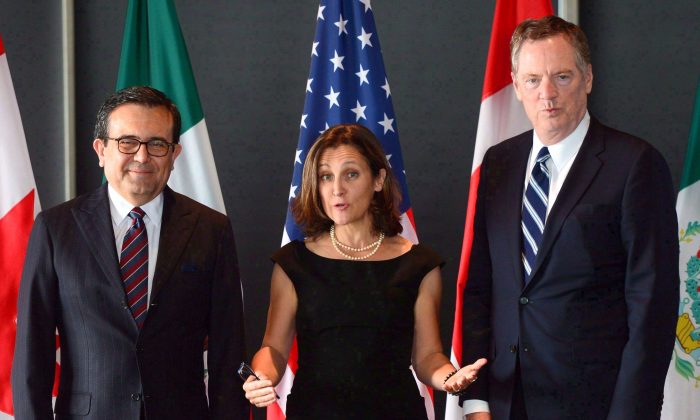 NAFTA: Deadlock on Hard Issues as Latest Round Concludes

MEXICO CITY—Another round of NAFTA talks wrapped up Nov. 21 in Mexico City with all key issues still deadlocked and a plethora of question marks lingering over the trade deal.

The negotiators made progress on a variety of technical files, nearly concluding some less-controversial chapters like digital trade, sanitary measures, customs enforcement, and telecommunications.

But on hot-button files like autos, dairy, dispute resolution, and a U.S. idea to make it easier to terminate NAFTA, they cite no real progress. Sources from the host country Mexico described a lingering standoff on multiple fronts, which Foreign Affairs Minister Chrystia Freeland confirmed back in Ottawa.

“There are some areas where more extreme [U.S.] proposals have been put forward. These are proposals we simply cannot agree to,” Freeland said outside the House of Commons.

“What we’ve done in some of these areas is ask for a better understanding of those proposals. We really feel a fact-based approach is the way to get a good result… [We’re asking]: ‘Do you agree with our facts, or do you disagree with our facts?’”

That approach has frustrated some on the U.S. side.

An American familiar with the talks says the other countries would be better off making counter-proposals, rather than what they did at this round—show up with presentations about how damaging the American proposals would be to the United States itself.

The Mexico City round ends with uncertainty on multiple fronts. Two major question marks: will President Donald Trump start pulling out of NAFTA as a negotiating ploy? And what happens if a deal isn’t done by the end of the current schedule of talks, now extended to March?

One thing the Mexican sources are adamant about: If Trump makes good on his threat to start the NAFTA cancellation process as a bargaining ploy, they will refuse to negotiate under that pressure and would rather let the United States withdraw.

They said they would simply allow the United States to walk away, accelerate trade talks with Brazil and Argentina, and expand trade with Canada in meat, wheat, and energy, where Canadian suppliers would pick up some of the U.S. slack.

Canada has not drawn such a hard line. The politicians leading the talks have attempted to turn down the public pressure. Freeland, Robert Lighthizer, and Ildefonso Guajardo skipped this round and will skip another round next month in Washington.

They will be back at the table in the next round in Montreal in late January. The politicians will review progress made, and begin assessing next steps for the February and March rounds and what happens thereafter if there’s no deal.