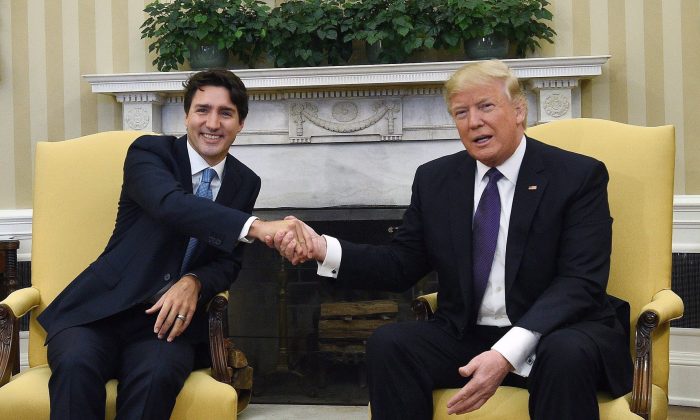 NAFTA Changes Will Amount to ‘More Than a Tweak’: Trade Expert

First round of negotiations due to begin in Washington on Aug. 16
By Will Koblensky
biggersmaller
Print

Mixed messages coming from south of the border means where the chips will fall in trade talks between Canada, the United States, and Mexico is changing by the day.

In the latest development, a new Buy American provision would stop roads and bridges in the United States from using Canadian materials. This comes less than a week after Congress backed down from taxing all imported goods.

When the talks begin in earnest on Aug. 16, Canada will face more than one demand that the Trudeau government won’t budge on, according to international trade lawyer Mark Sills of Toronto-based Sills Egsgard LLP.

“It’s become fairly clear that, while Canadian officials were led to believe—by the American president himself as well as some of the officials—that initially this was only going to be a tweak in NAFTA, when you read the summary of the specific negotiating objectives, this is more than a tweak,” Sills said, referring to Washington’s Summary of Objectives for the NAFTA Renegotiation released July 17.

“This is a fairly broad review of some of the very basic principles and provisions of NAFTA itself.”

Letting American companies export dairy north without a ceiling and losing Chapter 19 are two concessions the Canadian delegation is unlikely to make.

On top of scrapping the dispute-settlement mechanism Chapter 19—which Prime Minister Justin Trudeau insists must remain part of the deal—the United States wants greater access to Canada’s agricultural market, such as dairy, not currently included in the 23-year-old trade agreement.

“The United States is only looking to Canada’s market because they have overproduced. When too much milk is produced, prices crash, and the end result is job loss, loss of income for farmers, and in some cases, farmers having to shut down their farms,” the Dairy Farmers of Canada said in a statement to The Epoch Times.

Letting American companies export dairy north without a ceiling and losing Chapter 19 are two concessions the Canadian delegation is unlikely to make.

“The dairy sector in Canada has consolidated over the past 20 years but it’s still, compared to the United States, fairly small-scale. So a lot of the Canadian producers don’t have the economies of scale associated with some of the very large American dairy operations,” Sills said, adding that he doubts Trudeau will allow direct American competition in Canada.

“[Eliminating quotas] could dampen the ability of Canadian dairy farmers to sell in their own market.”

The other so-called red line for the Canadian government, Chapter 19, has been pivotal for Canada since the original NAFTA negotiations leading to its ratification in 1994.

“The Canadian government has taken the United States to arbitration under Chapter 19 and secured, in a number of instances, favourable decisions for Canada in the proceedings. The Americans are basically proposing to do away with this mechanism,” Sills said.

“They don’t like the idea that a non-American, i.e. an international panel, could review countervailing duty or anti-dumping decisions.”

One positive sign for Canada ahead of the first round of negotiations is the U.S. Congress’s abandonment of a border adjustment tax pushed by House Speaker Paul Ryan that would see any imported good slapped with a tariff.

This is welcome news for Stephen Laskowski, president of the Canadian Trucking Alliance.

“Anytime there’s discussion around a key measure like NAFTA and the border tax being tied to it, and the ability to significantly change how trade is conducted between our two countries, is something that sends a chill into the entire economy. Not just trucking but every other manufacturer or service entity that’s involved in north-south trade,” Laskowski said.

As a whole, the Canadian Trucking Alliance welcomes reduced tariffs and fewer barriers to trade, differentiating the organization from the Dairy Farmers of Canada.

“There’s a risk for winners and losers on both sides. That said, overall the idea of NAFTA and its trade components has been a good thing for both the United States and Canada and the economy as a whole,” Laskowski said, adding that considering individual industry concerns is part of the equation.

Laskowski said he was encouraged by the efforts of the Ontario and federal government to sway state and local legislators in the United States against protectionism ahead of the trade talks.

“I would think that, indeed, the prevailing thought process will be on the modernization and improvement of NAFTA over the coming months, not on the scrapping of NAFTA,” he said.

Despite promising during the presidential campaign to terminate the trade agreement, Sills thinks Trump is unlikely to go that route.

“The problem for [Trump] is that there are a lot of American jobs that now depend on free access to the Canadian market. By some counts, up to 9 million jobs are either partially or fully dependent on free trade with Canada, so to the extent he rips it up, he’s going to have to explain to the many workers that probably would lose their jobs as a result of this,” he said.

Sills noted that states in the Northeast and the U.S. Midwest are the regions that have the closest ties to Canada from an economic point of view.

“That’s one of the areas of his strongest support—Michigan, Ohio, Pennsylvania,” he said.

“So to the extent that workers in those plants and those [states] might be adversely affected, he’s got to be pretty worried about what that might mean for the upcoming 2018 midterm elections in the United States and the 2020 presidential election.”