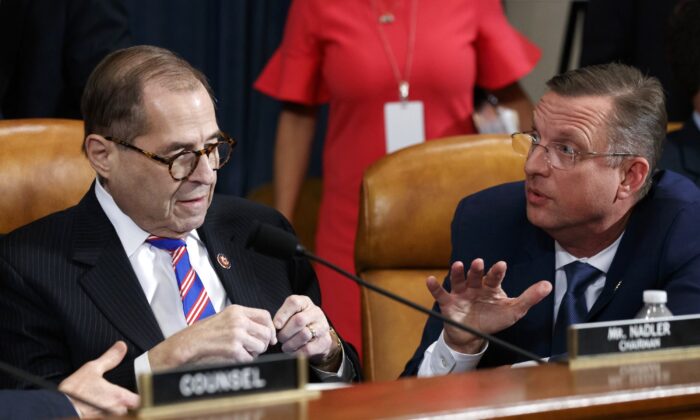 Nadler Shoots Down Republican Calls for Minority Hearing on Impeachment

Republicans in the Judiciary Committee will not have a minority hearing day on impeachment, Chairman Jerrold Nadler (D-N.Y.) ruled on Thursday morning.

Lawmakers in the committee held their second day of debates on articles of impeachment against President Donald Trump that were unveiled by top Democrats, including House Speaker Nancy Pelosi (D-Calif.), earlier in the week.

Rep. Doug Collins (R-Ga.), the ranking Republican on the committee, argued that House rules require the chairman to hold a minority hearing, where they would call up their own witnesses to testify.

Collins then accused Nadler of refusing to respond.

“The chairman has refused to respond to multiple additional requests that that hearing be scheduled,” he said. “It’s a farce that we are having to rule on this today, but there’s no other time we’re actually taking up the articles today.”

Nadler argued that Republicans on the committee were seeking “broader privilege” than what is allowed under the rules. He said the lone witness in the first hearing, George Washington Law School professor Jonathan Turley, showed the minority view was represented.

He said that regarding Collins’s request, there is “no precedent” for the move.

Nadler then told the committee, “I ruled that the point of order is not well taken.”

Later, Rep. Debbie Lesko (R-Ariz.) read a copy of the rules from a sheet of paper in front of her.

“It says in the rules that you require to set a date for a minority hearing,” she read, adding that during the hearing, the rules were “thrown out of the window.”

Nadler eventually said he would be open to a hearing but wouldn’t cancel Thursday’s hearing.

Democrats claimed that Republicans were not addressing the substance of the charges against Trump.

“Let us dispense with these process arguments and get to the substance of why we are here today,” Rep. Joe Neguse (D-Colo.) said.

Republicans on the Judiciary Committee said Democrats had overplayed their hand by accusing Trump of the crimes of bribery and extortion in the media and then pulling back.

“Whatever happened to quid pro quo, extortion, and bribery?” said Rep. John Ratcliffe (R-Texas). “The Democrats have been telling us it was clear, the facts were undisputed, the evidence was overwhelming. Except it wasn’t any of those things and now it’s all gone.”

Trump has denied wrongdoing and condemned the impeachment push as a “witch hunt” and a sham.

According to reports, House Democratic leaders are looking to vote on articles of impeachment next week before the Christmas break.

A Senate trial is expected next month on the charges, and high-level Republicans in the chamber appeared to be moving toward a consensus that a streamlined proceeding with no witnesses would allow Trump and the Senate to end the matter and quickly move on.