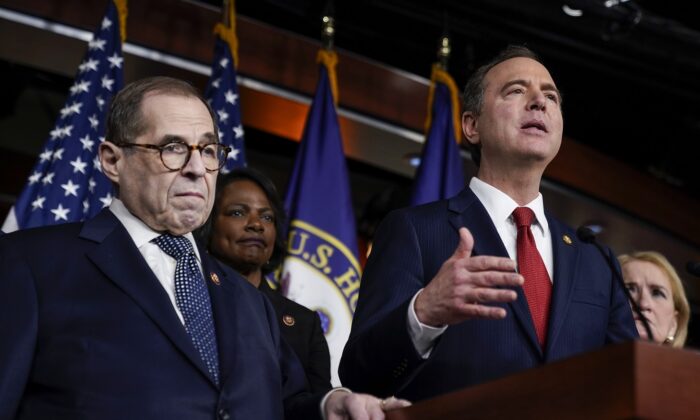 Reps. Jerrold Nadler (D-N.Y.) and Adam Schiff (D-Calif.) are calling on the Justice Department inspector general to investigate Attorney General William Barr for his comments defending the dismissal of the intelligence community watchdog.

Nadler, the House Judiciary Committee chairman, and Schiff, the House Intelligence Committee chairman, sent a letter to Inspector General Michael Horowitz and acting Director and Chief Counsel of the Office of Professional Responsibility Jeffrey Ragsdale on April 20, urging them to review Barr’s comments on the firing of former Intelligence Community Inspector General Michael Atkinson, made during a televised interview on Fox News.

The House Democratic leaders claimed that remarks may have “violated applicable Department of Justice (DOJ) policies and rules of professional conduct” because Barr had allegedly “mischaracterized” Atkinson’s conduct and the DOJ’s actions relating to the complaint.

“The role of Attorney General Barr and other senior DOJ officials, in coordination with the White House, in attempting to prevent the whistleblower complaint from reaching Congress—as required by law—warrants your attention.”

During that interview, Barr said the president was right to dismiss Atkinson, who handled the whistleblower complaint that sparked the impeachment proceedings against President Donald Trump.

Barr said Atkinson had exceeded his authority when he disclosed to Congress a whistleblower complaint centered around a phone call between Trump and Ukrainian President Volodymyr Zelensky.

“From the vantage point of the Department of Justice, he had interpreted his statute—which is a fairly narrow statute that gave him jurisdiction over wrongdoing by intelligence people—and tried to turn it into a commission to explore anything in the government, and immediately reported to Congress, without letting the Executive Branch look at it and determine whether there was any problem,” Barr said during the interview.

Nadler and Schiff both played a major role in Trump’s impeachment proceedings. They defended Atkinson in their letter, arguing that he had “faithfully discharged his legal obligations as an independent and impartial Inspector General in accordance with federal law.”

The House Democrats’ letter comes days after Sens. Dianne Feinstein (D-Calif.) and Mark Warner (D-Va.) sent a similar letter to the DOJ watchdog. The senators alleged that Barr had “misstated key facts” and that this raised broader questions about whether the attorney general was “following Department policies and rules of professional conduct that demand candor and impartiality from lawyers, particularly those who serve the public trust.”

It’s unclear whether Horowitz will consider the lawmakers’ requests. In a statement on April 4 reacting to Atkinson’s removal, Horowitz said, “Atkinson is known throughout the Inspector General community for his integrity, professionalism, and commitment to the rule of law and independent oversight.

“That includes his actions in handling the Ukraine whistleblower complaint, which the then Acting Director of National Intelligence stated in congressional testimony was done ‘by the book’ and consistent with the law.”

The Justice Department didn’t immediately respond to a request by The Epoch Times for comment.