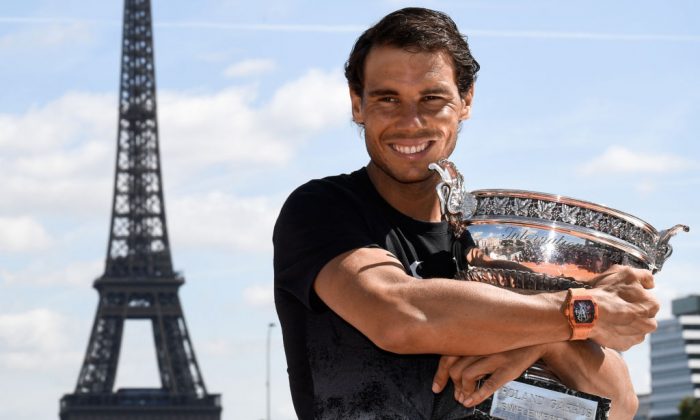 Spain's Rafael Nadal shows off the winner's trophy on June 12, 2017, a day after he won the men's Roland Garros 2017 French Open, in Paris, with the Eiffel Tower in Background. (Christophe Simon/AFP/Getty Images)
HK Sports

Rafa Nadal’s devastating 6-2, 6-3, 6-1 win against Stan Wawrinka in Paris on Sunday June 11 was his first Grand Slam win since 2014. Rafa has been dogged by injury since that time but started his comeback a year ago winning the Monte Carlo Masters in 2016. This year he reaching the final of the Australian Open in January but losing to Roger Federer.  Nadal returned the compliment by beating Federer in the Miami Masters, and then went on to win the Monte-Carlo Master and the Madrid Open before storming to victory at Rolland Garros last Sunday.

So is Rafa back to his old devastating best? He impressed in the French Open winning all his matches in straight sets but he had a fairly easy run in the tournament, meeting lower world ranked players at R4 (19), 1/4 (17), and  (55) in the semi-final. Wawrinka on the other hand had a tough tournament, meeting Gael Monfils, Marin Cilic and a hard 5 setter against Andy Murray in the semi-final. Yes, Wawrinka looked dejected as Nadal powered balls by him, but hard matches must have taken their toll.

If he wins Wimbledon in similar style we will be able to say he is back to his old form.