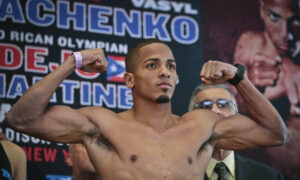 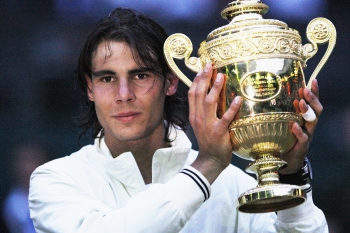 Spains Rafael Nadal poses with his trophy after defeating Switzerlands Roger Federer during the final match of the 2008 Wimbledon championships on Sunday. (Adrian Dennis/AFP/Getty Images)
Sports

NEW YORK—Third time's the charm! After losing back-to-back Wimbledon finals against World No. 1 Roger Federer, Rafael Nadal withstood two rain delays and impending darkness to deny the Swiss his sixth straight Wimbledon and win in five sets by a score of 6-4, 6-4, 6-7, 6-7, 9-7.

The epic match will go down as one of the best in Wimbledon, if not all of tennis, history. The rivalry between the currently two greatest players in tennis intensified, now that Nadal has broken some of Federer's more cherished streaks.

Besides stopping Federer's run of five Wimbledon championships in a row, Nadal also made sure that Federer would be deprived of his 41st straight win at Wimbledon and 66th consecutive win on grass. It is probably for these reasons and more that Federer called this match his "hardest loss of his career."

Federer was only broken two times before his championship match against Nadal, but that statistic was quick to change when the powerhouses started play after a rain delay.

Federer won the coin toss and elected to serve, to no surprise, but what was surprising was that Nadal broke Federer on only his second service game, which made most of the difference in a set won 6-4 by Nadal.

The World Number 1 was quick to rebound, breaking Nadal on his second service game and launching aces past Nadal to go up 4-1 in the second. But the Spaniard would not just bow down, and Federer literally handed Nadal points, allowing him to win the next five games for the second set. Frustration was clearly setting in for the Swiss, who was clearly agitated and even asked chair umpire Pascal Maria to hush the crowd.

But Federer wasn't ranked at the top without a reason, as he won sets 3 and 4 with tiebreaks when both sets went to 6-6. In the fourth set, Federer shook off two championship points to win the tiebreak 10-8 and even the sets at two.

Games went with serve throughout all of the third and fourth sets, until Federer was finally broken–at the worst time–at 7-7 in the deciding fifth set. The 4 hour, 48 minute match culminated in one of Federer's shots hitting the net and Nadal collapsing to the ground in ecstasy, on top of the Wimbledon world.

Many thought that it was only time before Nadal would defeat Federer on a non-clay surface and potentially rise to the number one spot.

Before the final, Nadal hadn't won against Federer on a surface other than clay since 2006, and had lost his previous two Wimbledons to the Swiss.

But Nadal's dominating victory at the Rolland Garros against Federer, along with his All England Club win, will surely incite talk about who will deserve the number one spot

"If Nadal wins this match, I feel it's almost inevitable he will be the No. 1 in the coming months," said Tim Henman of the BBC.

Nadal humbly disagreed. "[Federer's] still the number one, he's still the best, he's five times champion, now I have one," he said after the match.

Now that he has won his "favorite tournament," he may have his eyes at a higher prize: world number 1. And he may have a good claim for that spot. After Sunday's win, Nadal's all-time record against the current number 1 improved to 12-6.

Whether he overthrows Federer on top of rankings or not, Nadal will give Spaniards something else to celebrate, with his Wimbledon win coming just days after Spain's Euro '08 championship.