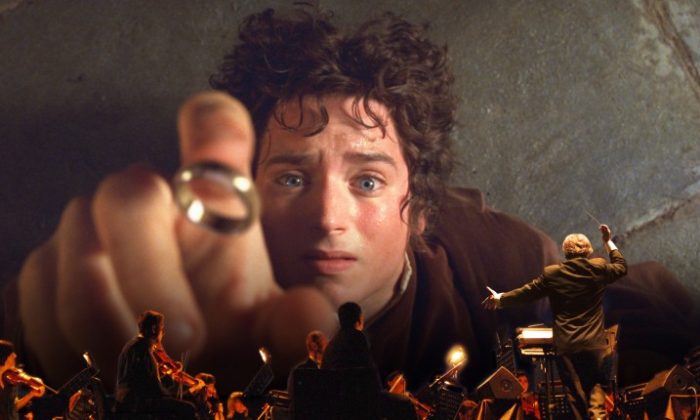 The NAC’s “The Lord of the Rings: The Fellowship of the Ring in Concert” added a new dimension to the popular film that was released to great acclaim in 2001. (Courtesy of National Arts Centre)
Entertainment

“The Lord of the Rings: The Fellowship of the Ring in Concert,” presented July 5-7 at the National Arts Centre in Ottawa, added a new dimension to the popular film directed by Peter Jackson that was released to great acclaim in 2001.

The more than 200 members of the “fellowship” of the National Arts Centre Orchestra, directed by Erik Ochsner, and the Lord of The Rings Chorus led by Laurence Ewashko, pulled out all the stops. They charmed and excited us during our magic carpet ride through Middle Earth.

The effect of the music was dramatic, heart-tugging and ethereal in turn, reflecting the twists and turns of the first book of the epic trilogy published by J.R.R. Tolkien in 1955. No wonder that the soundtrack won multiple Academy Awards and Grammys among other honours.

The magnificence of the soundtrack by Canadian composer Howard Shore shone as brightly as the golden ring that lies at the heart of the tale.

Shore participated in a pre-concert talk via Skype on July 5 at the NAC Fourth Stage. He is busy at home in the U.S. working on the soundtrack for one of Peter Jackson’s upcoming hobbit films, which are prequels to the Lord of the Rings trilogy.

“Music to me is an emotional language,” said Shore, whose favourite parts of the soundtrack were the themes for the shire and the hobbits. Shore performed at the NAC as early as 1969 with the rock bank Lighthouse, and was given the Governor General’s Performing Arts Award at the NAC in 2010.

I had never seen a “live to projection” show before so I was not sure what to expect. When you see a movie in the theatre, the visual and dialogue elements are typically front and centre, with the music playing a supporting although important role. In this presentation, the emphasis was on the music, and nobody seemed to mind that the dialogue was sometimes hard to hear or even obscured.

The French version of the film was shown, complete with French subtitles and credits. The chorus however, sang in Tolkien-created languages such as Elvish, as well as in English.

The orchestra was at the front of the stage while the choral group stood behind them, almost directly under the 18-metre screen. Overall, the music and singing amplified and accentuated the emotional aspects of each scene.

The performances really connected with the audience, which often seemed enraptured, particularly when the soloists were showcased. The soaring voices of soprano Nancy Ellen Lundy were breathtaking, as were those of boy soprano Matthew Kronberg.

The printed program provided a synopsis of the story as well as detailed information about each musical theme, including technical details for the musically sophisticated. Much of the information was gleaned from Doug Adams’s book The Music of the Lord of the Rings Trilogy.

It was wonderful to see such a wide range of age groups represented in the audience. While patrons were encouraged to dress in costume, I did not see any, although a young woman wore a lovely reproduction of Arwen’s pendant. During the intermission children and adults alike posed for photos, making use of costumes and props in a reproduced Middle Earth Tavern in the foyer.

The Lord of the Rings trilogy has inspired a multitude of artistic efforts including animated films, theatre projects, art books, calendars, costumes, toys, and collectibles. The concert was a very accessible way to relate to Tolkien’s characters, and really enhanced and deepened the film experience.

At the end of the evening, the audience relayed its approval with ring-ing applause and a standing ovation for the orchestra and chorus that so well animated Tolkien’s story and Jackson’s cinematic vision.

Similar concerts will take place around the world this summer and fall, while live to projection concerts will also be staged for the other two films in the trilogy. “The Lord of the Rings Symphony,” which features music and still photographs from the three movies, will be presented in China in July.

Joyce MacPhee is an Ottawa writer and editor