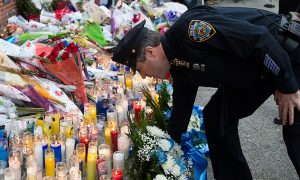 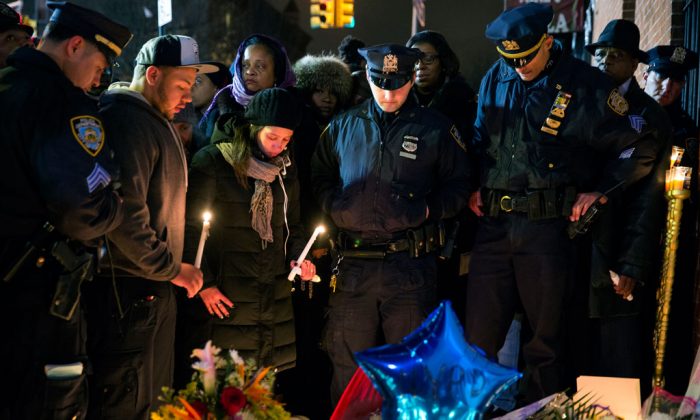 Police officers and other mourners stand in silence, Sunday, Dec. 21, during a candlelight vigil near the spot where two New York Police Department officers, sitting inside a patrol car the previous day, were shot by an armed man, killing them both. The assailant then went into a nearby subway station and committed suicide, police said. (AP Photo/Craig Ruttle)
New York

After Officers Rafael Ramos and Wenjian Liu were shot and killed by Ismaaiyl Brinsley on Saturday afternoon in Brooklyn, the NAACP’s Legal Defense Fund said, “These two killings and the life-threatening injury, like so many other unfortunate incidences of gun violence, provide a stark example of the need for sensible gun control measures, and the need to thoughtfully address untreated mental illness.”

Nationwide protests over the killings of Eric Garner of Staten Island and Michael Brown of Ferguson, Mo., should not be treated as the cause of the deaths of the two officers, the organization said. “We caution against escalating an already tense national state through rumor and conjecture,” it added. “Whatever motivation lay in the apparently troubled mind of the now deceased shooter of these officers, there is no connection between the peaceful protests of thousands of people of all races all over the country, and, indeed, around the world, and this hideous act of violence.”

The New York State Rifle & Pistol Association (NYSRPA), an affiliate of the National Rifle Association (NRA), issued a response to the NAACP’s calls for more gun control. The calls, said NYSRPA Vice President Jacob J. Rieper, “shows just how totally out of touch with reality” the NAACP is.

“They long ago gave up any semblance of being a civil rights organization and do little now but make excuses for violent, anti-social members of society,” he told Epoch Times in an emailed statement Monday afternoon. “They cry racism where none exists in hopes of intimidating their opponents and diverting attention away from the real issues. What was the response from the NAACP when protesters were calling for dead cops at a rally a week ago? Dead silence. Why should anyone take them seriously after that?”

It’s unclear if Brinsley, who was black, took part in the protests over the officer-involved shooting deaths of Garner and Brown. However, he made comments about the two men on Instagram before allegedly shooting the two NYPD officers.

Chief of Detectives Robert Boyce said that Brinsley had a lengthy criminal record, including 19 arrests in Ohio and Georgia. He also spent two years in prison for gun possession.

Brinsley, 28, also filled out a questionnaire when he was in custody in Georgia, marking “yes” when asked if he was under the care of a psychologist or was ever admitted to a mental institution, reported the Wall Street Journal.

Brinsley, 28, also filled out a questionnaire when he was in custody in Georgia, marking “yes” when asked if he was under the care of a psychologist or was ever admitted to a mental institution, reported the Wall Street Journal.