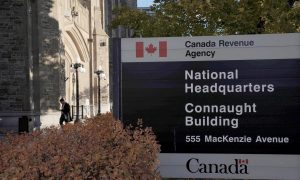 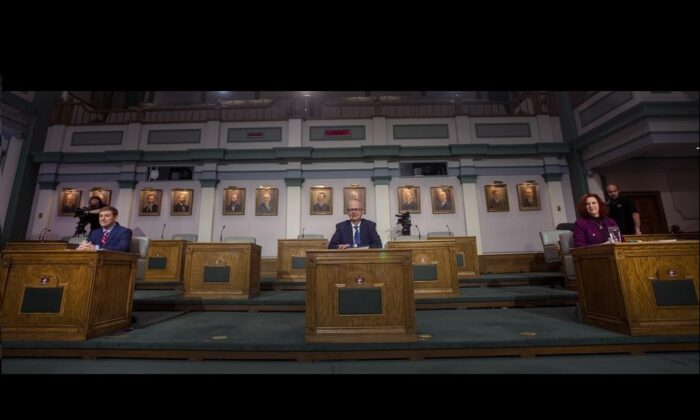 (L-R) Liberal Leader Andrew Furey, Progressive Conservative Leader Ches Crosbie, and NDP Leader Alison Coffin sit prior to the start of their televised debate from the floor of the House of Assembly in St. John's N.L. on Feb. 3, 2021. (The Canadian Press/Paul Daly)
Canada

ST. JOHN’S, N.L.—Less than 12 hours before polls were set to open in much of the province, Newfoundland and Labrador’s chief electoral officer on Friday called off all in−person voting in response to a COVID−19 outbreak.

Bruce Chaulk announced voting in the provincial election set for Saturday will now be exclusively by mail, and ballots must be received by March 1.

“I urge anyone interested in voting in this election to apply for a special ballot to ensure your democratic participation,” he said in a news release.

His announcement came shortly after health officials announced that they had confirmed the United Kingdom variant was behind the COVID−19 outbreak that hit the St. John’s region this week.

Voters in 22 of the province’s 40 ridings were set to head to the polls Saturday after Chaulk on Thursday suspended voting across the Avalon Peninsula, which includes St. John’s.

Under the Alert Level 5 imposed Friday by chief medical officer Dr. Janice Fitzgerald, gatherings of more than 5 people are prohibited.

An Elections NL spokeswoman said earlier Friday that many poll workers in the ridings where the election was set to proceed were quitting over fears of contracting and spreading COVID−19.

Progressive Conservative Leader Ches Crosbie had called for the election to be delayed across the province, and on Friday one of his candidates echoed that plea.

“I never thought in a million years that everything would be so unorganized and confusing and unsafe,” Rhonda Simms said in an interview. “Everything is a mess.”

Shortly before the delay was announced, Progressive Conservative candidate Damian Follett, who is running in the St. John’s riding of Mount Scio, confirmed that he’d been diagnosed with COVID−19.

Throughout the day, confusion about the election’s status reigned, and the party leaders were largely absent from view, apart from an appearance by Liberal Party Leader and Premier Andrew Furey at a public health briefing on the outbreak.

Simms suspended her in−person campaign Friday in the Lewisporte−Twillingate district when she found out someone who had visited her campaign office had recently tested positive for the disease.

Noting that Fitzgerald has said the outbreak would likely spread beyond the St. John’s region, Simms said delaying the election in the rest of the province was the only safe and fair thing to do.

“This past week … we have had three major snowstorms,” she said. “Because of that, there are people in this community that I fear have not gone to get tested.” The closest spot they could get swabbed for COVID−19 is more than 45 minutes away, she added.

As the number of cases shot up, Chaulk initially said Thursday that the power to delay an election lay with the chief medical officer. But later that day Fitzgerald said she had sought legal advice and been told it wasn’t her call to make, and it was Chaulk who announced the partial delay.

A news release from the chief electoral officer Friday afternoon said parties could continue campaigning in ridings where the vote was delayed until the day of the rescheduled vote.

During a virtual news conference Thursday evening, Furey said his caretaker government, which by convention exercises limited power, will remain in place until the election can be fully held.

On Friday night, shortly after Chaulk suspended all in−person voting, Crosbie issued a statement, expressing his concern about the COVID−19 situation.

“Our province deserves a thoughtful conversation about why it took so long for us to reach the right decision in postponing this election and how we hold our political leaders accountable,” he wrote. “But that discussion must wait for another day.”