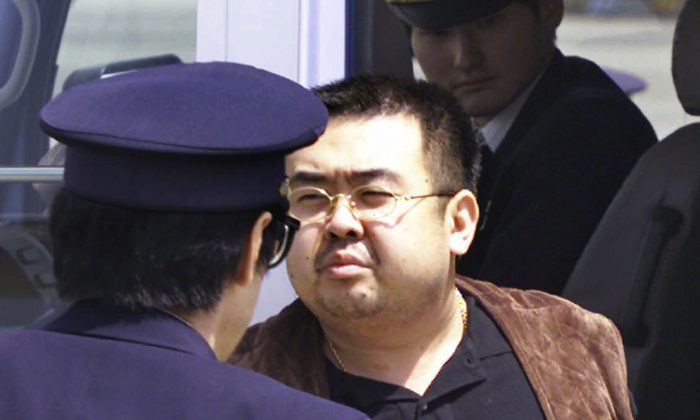 KUALA LUMPUR, Malaysia—A high-level North Korean delegation arrived in Kuala Lumpur on Tuesday seeking the body of leader Kim Jong Un’s half brother, the victim of a nerve-agent attack that many suspect the North itself of orchestrating.

The body of Kim Jong Nam, killed Feb. 13 at Kuala Lumpur’s airport, is at the center of a heated diplomatic battle between North Korea and Malaysia. North Korea opposed Malaysian officials even conducting an autopsy, while Malaysia has resisted giving up the body without getting DNA samples and confirmation from next of kin.

The delegation includes Ri Tong Il, a former North Korean deputy ambassador to the United Nations, who told reporters Tuesday outside the North Korean Embassy that the diplomats were in Malaysia to retrieve the body and seek the release of a North Korean arrested in the case. He said the delegation also wants “development of the friendly relationship” between North Korea and Malaysia.

Malaysian officials have confirmed that the victim of the attack was Kim Jong Nam. North Korea, however, has identified him only as a North Korean national with a diplomatic passport bearing the name Kim Chol.

Health Minister Subramaniam Sathasivam said Malaysia will continue to insist that the body be positively identified by medical examiners through DNA or other means before it can be released. He said the protocol is to release it to the next-of-kin once identification is completed.

Asked how long Malaysia can keep Kim’s body at the morgue, he said “we can keep as long as we want.” Police have said that the body will eventually have to be released to the North Korean embassy if there is no claim by Kim’s family members.

The killing of Kim Jong Nam took place amid crowds of travelers at Kuala Lumpur’s airport and appeared to be a well-planned hit. Malaysian authorities say North Koreans put the deadly nerve agent VX on the hands of two women who then placed the toxin on Kim’s face. Kim died on the way to a hospital, within about 20 minutes of the attack, they say.

Malaysian Attorney General Mohamed Apandi Ali said Tuesday in a text message to The Associated Press that the two women accused of killing Kim Jong Nam—Indonesian Siti Aisyah and Vietnamese Doan Thi Huong—will be charged with murder Wednesday and would face a mandatory death sentence if convicted. Both women have been arrested, and authorities must file charges by Wednesday or release them.

Both women have reportedly said they thought they were part of a prank TV show when they put their hands on Kim. Indonesian officials have said Aisyah told them she was paid the equivalent of $90.

Arrmanatha Nasir, the spokesman for Indonesia’s Foreign Ministry, said Aisyah’s lawyers have already begun preparing her defense. Indonesia expects Malaysia will uphold a legal process based on the presumption of innocence until proven otherwise, he said.

Malaysia has also detained a 45-year-old North Korean, Ri Jong Chol, whose role in the killing is unclear. Asked if the North Korean will be charged, Apandi said it depends on the outcome of the investigation.

Authorities are seeking seven other North Korean suspects, four of whom fled the country the day of Kim’s death and are believed to be back in North Korea. Others sought include the second secretary of North Korea’s embassy and an employee of North Korea’s state-owned airline, Air Koryo.

Malaysia hasn’t directly accused North Korea of having masterminded the killing, but South Korea has. It has not provided evidence, but suspicions were heightened over the weekend when Malaysia announced that VX killed Kim. Producing the deadly toxin requires a highly sophisticated lab, and VX is one of many chemical weapons North Korea is believed to possess.

South Korean lawmakers said Monday that the country’s National Intelligence Service told them in a private briefing that four of the North Koreans identified as suspects are from the Ministry of State Security, the North’s spy organ.

Kim Jong Nam was estranged from Kim Jong Un. He reportedly fell out of favor with their father, the late Kim Jong Il, in 2001, when he was caught trying to enter Japan on a false passport to visit Tokyo Disneyland.

He had been heading to Macau, where he has a home, when he was killed.

Isolated North Korea has a long history of ordering killings of people it views as threats to its regime. Kim Jong Nam was not known to be seeking political power; he was best known for his penchants for drinking, gambling and expensive restaurants. But his position as eldest son of the family that has ruled North Korea since it was founded could have made him appear to be a danger.

Malaysia continues to seek DNA samples from Kim Jong Nam’s immediate family. He is believed to have two sons and a daughter with two women living in Beijing and Macau.