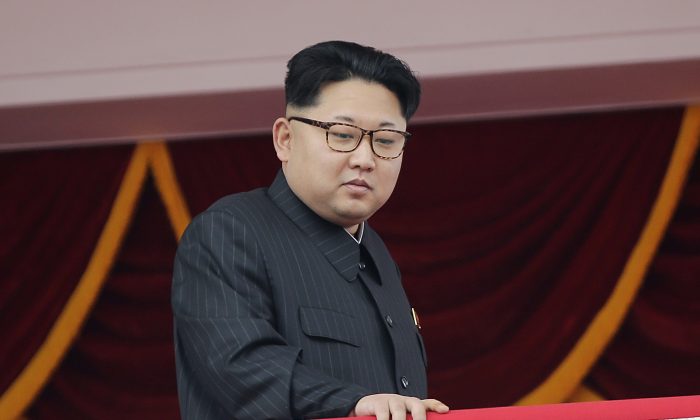 In this May 10, 2016, photo, North Korea's leader Kim Jong Un watches a parade from a balcony at the Kim Il Sung Square in Pyongyang. (AP Photo/Wong Maye-E)
Asia & Pacific

North Korea Vows to End Diplomat Communication Channel With US

SEOUL, South Korea— North Korea said Monday it will end a diplomatic communication channel with the United States and hinted at harsher punishment for Americans detained in the country in retaliation for U.S. sanctions that target leader Kim Jong Un.

The U.S. government last week imposed penalties on Kim and 10 other top officials for alleged human rights abuses. North Korea is already sanctioned because of its nuclear weapons program, but it was the first time that Kim has been personally sanctioned. The North called the sanctions tantamount to a war declaration.

On Monday, the North’s state media said it told the United States it will terminate contact through a U.N. channel in New York that allowed diplomats to communicate.

The New York channel refers to a method for North Korea’s U.N. diplomats to communicate with U.S. diplomats in New York. This is needed because the countries don’t have diplomatic ties and their animosities have deepened because of the North’s nuclear and missile programs.

In Washington, State Department spokesman John Kirby did not directly address the fate of the New York channel. In comments to reporters, he called on North Korea “to refrain from actions and rhetoric that only further raise tensions in the region.” He said he would not comment on the details of diplomatic exchanges.

The North also said it informed Washington that it will handle all issues between the two countries according to an unspecified wartime law, including Americans detained in North Korea, according to the state-run Korean Central News Agency.

South Korean media have suggested that North Korea might use the wartime law to hand out harsher punishments on Americans detained in the North.

The North’s actions could complicate U.S. efforts to secure the release of at least two American citizens being held for alleged espionage, subversion and other anti-state activities. One is serving a 10-year prison term with hard labor while the other received 15 years.

Kirby urged North Korea to adhere to the Vienna Convention on Consular Relations and grant consular access to any detained U.S. citizens without delay. He also reiterated a call for the Americans to be freed.

North Korea in the past released or deported American detainees only after high-profile Americans visited the country on their behalf. Outside analysts say Pyongyang often attempts to use foreign detainees to wrest concessions from other countries.

The North’s announcement came hours after it made more threats, this time over a U.S. plan to deploy an advanced missile defense system in South Korea.

The North’s threat, carried in state media, was typical of past bluster. It came three days after Seoul and Washington said they were close to determining a location in South Korea for the Terminal High-Altitude Area Defense, or THAAD, system to better deal with North Korean threats.

The North said it will take an unspecified “physical counter-action” as soon as the THAAD location is announced. The statement also carried one of the North’s favorite, oft-repeated threats: To turn Seoul into a “sea of fire.” It has regularly warned it would do that since 1994. U.S. and South Korean officials say THAAD only targets North Korea, but China and Russia suspect it could also help U.S. radars detect their own missiles.

The two Koreas are divided along the world’s most heavily fortified border. The United States stations about 28,500 soldiers in South Korea.