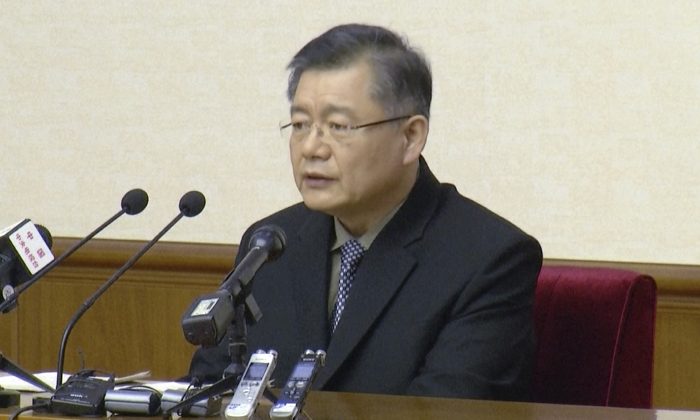 PYONGYANG, North Korea—North Korea’s Supreme Court sentenced a Canadian pastor to life in prison with hard labor on Wednesday for what it called crimes against the state.

Hyeon Soo Lim, who pastors the Light Korean Presbyterian Church in Toronto, was given the sentence after a 90-minute trial. He has been in detention since February.

Lim entered and left the court in handcuffs flanked by two public security officers in uniform. The handcuffs were removed in court during the trial. He kept his head bowed most of the time and answered questions in a subdued tone.

The crimes he was charged with included harming the dignity of the supreme leadership, trying to use religion to destroy the North Korean system, disseminating negative propaganda about the North to the overseas Koreans, and helping U.S. and South Korean authorities lure and abduct North Korean citizens, along with aiding their programs to assist defectors from the North.

Lim’s lawyer asked the court to take into account the fact that Lim is a fellow Korean and that he had frankly confessed to everything the prosecution had brought up. Lim pleaded to be given a chance and said if the court gave him one he would not do anything bad again.

In July, Lim appeared at a news conference organized by North Korean authorities in Pyongyang and admitted to plotting to overthrow the North Korean state. Other foreigners detained in North Korea and then released have said they were coerced into making similar statements and confessing guilt during their detention.

Lim’s relatives and colleagues have said he traveled on Jan. 31 on a regular humanitarian mission to North Korea where he supports a nursing home, a nursery and an orphanage. They said Lim, who is in his early 60s, has made more than 100 trips to North Korea since 1997 and that his trips were about helping people and were not political.

North Korea has very strict rules against any missionary or religious activities that it sees as threatening the supremacy of its ruling regime. Merely leaving a Bible in a public place can lead to arrest and severe punishment.

Both the U.S. and Canadian governments warn against travel to North Korea.

Canadian Prime Minister Justin Trudeau expressed “tremendous” concern with the sentence and noted Canadian consular officials have not been allowed access to Lim while he’s been in custody.

“We have tremendous concern about it. The issues of North Korea’s governance and judicial system are well known,” Trudeau said. “We are very concerned about someone being sentenced to life in North Korea and we certainly hope to be able to engage with this individual and stand up for his rights.”

Diana Khaddaj, a spokeswoman for Canada’s Global Affairs Department, said earlier Canada is “dismayed at the unduly harsh sentence given to Mr. Lim by a North Korean court, particularly given his age and fragile health.”

“Despite repeated requests, Canadian officials have not been able to meet with him to verify his health and well-being. The trial was our first opportunity to see him. This is a serious violation of the Vienna Convention on Consular Relations and the right of states to have consular access to their citizens,” Khaddaj said.

Last year, North Korea released Kenneth Bae, a Korean-American missionary who was convicted of anti-state crimes and had been serving a 15-year sentence.

Bae, whose arrest received worldwide attention, suffered medical issues while in detention. He was freed along with another American detainee after a secret mission to the reclusive communist country by James Clapper, the top U.S. intelligence official. He is reportedly planning a book about his 2-year detention.

An Australian missionary detained for spreading Christianity was deported last year after he apologized for anti-state religious acts and requested forgiveness.