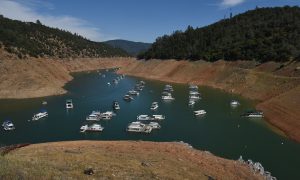 N. Korea Says It Has Been Hit by Worst Drought in 100 Years

SEOUL, South Korea—North Korea says it has been hit by its worst drought in a century, resulting in extensive damage to agriculture.

The official Korean Central News Agency said the drought has caused about 30 percent of its rice paddies to dry up. Rice plants normally need to be partially submerged in water during the early summer.

“Water level of reservoirs stands at the lowest, while rivers and streams (are) getting dry,” it said in a report Tuesday.

An official from South Korea’s Unification Ministry, who asked not to be identified because of office rules, said precipitation in North Korea was abnormally low in May. Its production of rice and potatoes could decline by as much as 20 percent compared to average years if the shortage of rainfall extends to early July, he said. The official couldn’t confirm North Korea’s claim that it was experiencing its worst drought in a century.

KCNA said other crops were being planted in paddy fields in an attempt to reduce the agricultural shortfall.

North Korea suffered a devastating famine during the 1990s that is believed to have killed hundreds of thousands of people. The famine is also believed to have loosened the authoritarian state’s control over the economy by damaging its public food distribution system and paving the way for private economic activity in unofficial markets.